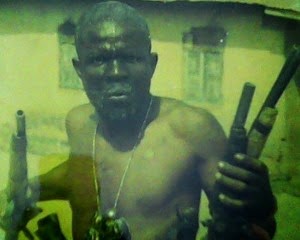 New details have surfaced about Popular Yoruba actor Ganiu Oyeyemi aka Ogunjimi who got arrested in early March for raping his daughter’s friend.

Let me give you the full gist of what actually happened.

According to my source in Osogbo, the lady has been identified as Ayo (last name withheld by request), she happened to be an upcoming actress in Ogunjimi’s theatre group.

On Sunday the 2nd of March 2014 around 3pm, Ogunjimi and Ayo were caught having sex. At the climax of the thing, the lady screamed.

So at that point, a passer-by who heard the scream ran to the police station to report the alleged rape case.

Police stormed Ogunjimi’s residence and arrested him. He was held in detention for three days.

The veteran Nollywood actor confirmed to police he had sex with the 24-year-old lady but he didn’t rape her.

Ogunjimi has been released on bail.

His case has been adjourned to Friday April 11th, 2014 for hearing.

Continue Reading
You may also like...
Related Topics:case, ogunjimi, update