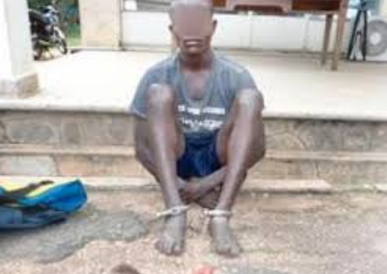 Ikeja High Court has sentenced an okada rider, Akeem Ayoade, and two others to 21 years imprisonment for robbing housewife of N5,000. The trio, who were previously charged for armed robbery, were all found guilty and sentenced for conspiracy to robbery, since there was no substantial evidence to prove the charge of armed robbery.

22-year old Ayoade and his accomplice,Wasiu Azeez, 27, and Adelani Jamiu, 33, were convicted on a two count charge of conspiracy to robbery contrary to section 297 of the criminal law No. 11, Laws of Lagos State, 2011. The trio committed the crime on January 25, 2012 at Pottri Bus stop Ejigbo, Lagos in the Ikeja judicial division.

According to the charge sheet, the convicts did rob Mrs Ayinke Akinremi of her handbag containing N5,540 and a Nokia handset. The court, however, revealed that the prosecution, A.A George, has proved beyond reasonable doubt, the case of conspiracy to robbery, which was carried out by using a motorcycle, especially with the facial recognition of the convicts by the victim.

However, in his allocutus, the defence lawyer, Worer Obuagbaka, appealed for leniency stating that the trio, who were first offenders, as young men, could still contribute effectively to the growth and development of the country.

“The trio are still young, energetic men and first offenders, and my plea to the court is to tamper justice with mercy,” he noted. Justice Oluwatoyin Ipaye after given a keen consideration to the plea, acknowledged the truth inherent in the counsel’s plea said that the youthful age wasn’t an excuse for upholding crime.

She further added that the punishment was meant to send a clear disciplinary message to would be offenders of the same age bracket. Justice Ipaye, however, convicted the trio and sentenced them to 21 years imprisonment each.