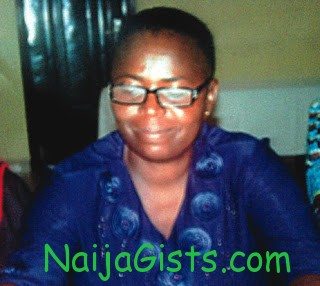 An Okada man, Ifeanyi has been arrested for allegedly selling a professional nurse, Mrs Helen Ilonge to ritualists for N10,000. naijagists.com

Mr  Ilonge had on Tuesday last week took Ifeanyi’s motorcycle on her way to Igoli along the Ogoja-Ikom Highway in Ogoja LGA.

Ilonge, the coordinator of Primary Health Care in Bekwarra Local Government Area of Cross River State, was coming from a programme at the Assemblies of God Church, Abakaliki in Ebonyi State, and had alighted from a vehicle at Okpongrinya junction before taking the bike.

It was gathered that Ilonge (51) was beheaded while her other vital reproductive parts such as breast and vagina were removed for ritual purposes.

Ilonge’s neighbour, Mrs. Theresa Idagwu, on Sunday said, “Ifeanyi took the lady from Okpogrinya Junction on the pretence that he was taking her to the village, which is 10 minutes drive from the point. But along the way, he stopped and handed her over to kidnappers at Ukpe.

Meanwhile, the woman had called her daughter, Victoria, around 9pm that she had taken a bike at Okpogrinya Junction on her way to Igoli.

She said when she gets to her destination; she would call again so that Victoria would boil water for her to take her bath. That was Ilonge’s last call.”

Repeated calls made to the woman’s line, according to Idagwu, indicated that it was switched off.

She said Ilonge’s family became worried when the woman did not return home. “We went everywhere- police stations, hospitals and even her friends in Igoli, thinking that may be an accident had occurred along the road but we got nothing,” Idagwu added.

Two days later, Idagwu said someone called Victoria on her phone and informed her that her mother had been kidnapped. The caller demanded a ransom of N50, 000 to be remitted in form of recharge cards.

She said, “Since her daughter could not raise the money, she rushed to the Bekwarra LGA headquarters where the head of administration, Mr. Bisong Bogbo, and the chairman, Mr. Linus Edeh, provided the money with which she bought recharge cards and sent to the caller.

“The voice claimed that he needed the recharge cards so he could sell and run away from his master who is a ritual killer. He claimed that he had been serving his master for a long time and wanted to run away. He said once he gets the cards, he will break the door where the nurse is being kept and release her.”

The LGA’s head of administration, Bogbo, confirmed that the cards were sent to the kidnapper through Victoria’s telephone.

He said immediately the alleged kidnapper confirmed receipt of the cards; he switched off his telephone.

Luck, however, ran out of Ifeanyi. Policemen tracked his telephone line and discovered that he called Victoria from Abuochiche.

Further investigations, it was gathered, showed that Ifeanyi had been selling the cards in the village immediately he got them.

When he was arrested, Bogbo told our correspondent that Ifeanyi led the police to one of the ritual killers identified simply as Elvis.

Elvis, according to Bogbo, confessed that the nurse had already been killed and some of her vital organs removed before Ifeanyi asked for the recharge cards.

Elvis also said the remains of the woman were buried in a swamp.

At the council headquarters, one of the late nurse’s colleagues, Mr. Gabriel Ogar, said she was probably the kindest woman he ever worked with.

Ogar said, “I have worked with five coordinators, but I know that she is just the best so far. She worked to the admiration of Governor Liyel Imoke and now she has been killed leaving her five children without a helper.

“Her husband died 12 years ago and since then she has been the one taking care of the children and only one has graduated. Please let the government do something for those poor children.”

When contacted on Monday, the state Commissioner of Police, Mr. Osita Ezechukwu, said the police were still investigating the matter.

He said four suspects had been apprehended by the anti-homicide unit, adding that when the investigation was completed the suspects would be prosecuted.

“We have taken confessional statement from them. Those who are not involved have been allowed to go while those who are involved are still in detention,” Ezechukwu said. (culled from Punch)

OMG  these evil ritualists are out of control in Nigeria.

God please have mercy on this nation.