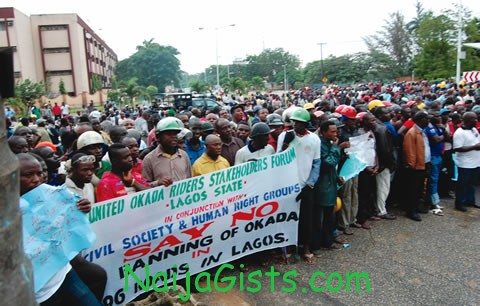 Okada riders in Lagos on Monday afternoon held a major protest in response to the new banning law which will prevent them from operating on over 500 roads in Lagos State Nigeria. naijagists.com

They even attacked some BRT (Bus Rapid Transport) buses at Onipanu area of Lagos a move which forced some frustrated passengers to trek to their various destinations.

Here is what Tijani Perkis, Lagos Chairman of Motorcycle operators said in response to the protest:

“I have nothing to say now. But I will be meeting with the governor tomorrow and after our meeting I may talk to the press,”