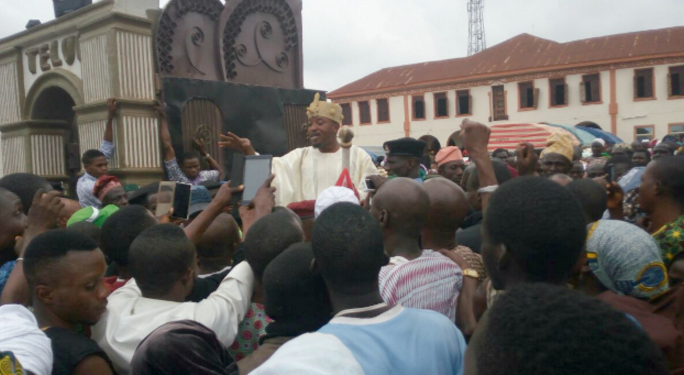 Some thugs on Wednesday attacked the Oluwo of Iwo in Osun State, Oba Adewale Akanbi.

According to the Nation, the hoodlums attacked the palace during the installation of Taofeeq Adedimeji Tadese as the pioneer Sooko of Elee Royal House.

It was learnt that the hoodlums axed one of the police officers on guard, Sergeant Ikuesan Taiwo, on the head.

Weapons, such as axes, pistols, stones, clubs and charms were allegedly brandished by youths who invaded the Oluwo’s palace.

The youths, who opposed the new Sooko, threw stones into the palace to stop the ceremony.

But Oba Akanbi instructed the security men to be calm, despite the attack.

One of the miscreants was reportedly arrested and is assisting police investigation.

Despite the security threat, Oba Akanbi installed Tadese as the pioneer Sooko of Elee Royal House in Adagunodo Ruling House.

Prior to the installation, miscreants were said to have positioned themselves with harms to stop the induction of the new Sooko, claiming the Elee compound was not for Oluwo while majority of the actors were not native of the compound.

Chief Mojirin of Iwo was also allegedly kidnapped by the angry youths at the wee hour of Wednesday for his loyalty to Oluwo.

The police have declared those suspected to be behind the attack wanted for attempted murder, kidnapping and public unrest.