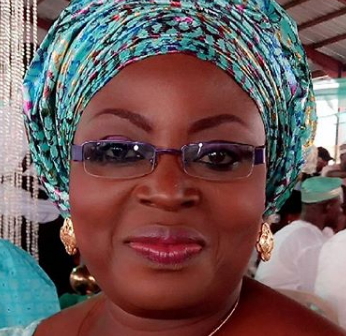 Let’s start with how you got into acting?

I actually started acting at the age of 8 with Nigerian Television Authority {NTA}, Ibadan. That was during a long term holiday. My father had a friend who I wouldn’t know if he is still alive or not because my father is late now. I think he had a crisis with a particular actor who was supposed to take the role which I was given. It was a stage drama during the Christmas period. The man met with my dad and pleaded before him to allow me to go with him that they were having a serious challenge with a kid actress who was meant for the role. The girl was very sick; my father had no choice than to release me because he never wanted to hurt his friend. That was how it started but you know, being a child, I didn’t have the opportunity to really go into it fully. But I started acting fully during my days in secondary school.

Which year was that?

Well, I am talking of 70s. There was this guy whom I can’t remember what his name is but we called him Water Aqua. He took me back to NTA Ibadan in the 70s to enroll in a drama troupe. I have forgotten the name but I remembered that from there I crossed over to Laolu Ogunlesi’s Theater Group. After that, I moved to BCOS Ibadan. There was this particular day that I was done with my rehearsals and as I was about to leave the premises of BCOS, I saw this gentleman who was driving and he said hello fine girl, I have been watching you for quite a while at your rehearsals, where are you heading to? I responded with I am heading home. He gave me a ride and on our way, he said he has been watching me right from NTA that I will be a great actor in the future. He further asked if he could make me a cross over actress, I mean from English to Yoruba. I was so excited about the offer. He was the one who brought me to Yoruba movie industry. He is the one I regards as my boss till date. I am talking about Comrade Victor Ashaolu, the former ANTP President. I was under his tutelage for 11 years. Subsequently, I got my freedom.

How has the journey of over 40 years been since you started?

Gbolahan, you know I wouldn’t lie to you; it has been tough and rough. But I thank God for his mercy because a lot of people who started after me are nowhere to be found now. Some are dead without seeing the limelight. I must confess to you, despite the fact that the road has been tough and rough, I thank God for his mercy on me. I am still alive and kicking. The most important thing is that, the world still recognizes who Jumoke Olatunde George is.

At a point you left the industry, what really happened?

You are very correct and thank you for the memory. I was out of the industry for about 14 good years. I really can’t point my finger on what happened for those years. I just noticed that directors and some of the producers stopped inviting me for jobs. But if you ask me, I will say it has to do with my attitude and my behavior. There is no point in lying, a lot of directors and producers really wanted to date me which I stood my ground that such will not happen because that wasn’t the reason I joined the industry. I am from a very strict and disciplined home. My father left as a retired cornel in the military and my step mother retired major. I grew up under those two. So, it wasn’t easy. A lot of things that I met with in the industry were things that didn’t really go down well with me. So, because I stood my ground that I won’t involve in this part, the hatred came. My stubbornness may have affected my career. Rather than reasoning well with me, they saw it as pride and stubbornness. For God’s sake, what is so special about me? I think the idea was if they could be dating people who are bigger than me, then what so special about me. That was the number one thing that pulled me down from progressing in acting. I wouldn’t know if there are other reasons apart from the ones I stated here, but they stopped calling me for jobs. But you see, God always fight the battles of the faithful ones. I must confess to you, almost 10 years out of those 14 years were very good years for me because while I was abandoned by movie practitioners, I was a member of FIBAN, Freelance and Independent Broadcaster Association of Nigeria. Then, I had 5 live programmes I was anchoring. I really didn’t miss acting because they believed they closed the door on my acting career, unknowing to them that God has really prepared an offer for me elsewhere.

How did you return into acting?

Believe me, my coming back; I really owe it to 2 people. I am seriously indebted to those 2 people and one of them is Alhaji Kazeem Afolayan, CEO Epsalum Movie Production. In 2011, I had a serious major operation but before that, there was this production I did, I took it to him for marketing and he bought it. Then, when he came to pay me a visit, he busted into tears, asking is that Jummy? And I said yes, the only thing you can do for me is to forget about your emotion, all I need now is money. So, he bought the movie from me because at that point in time, I really needed money. He gave me the money which I used to rectify my health issues. Later when I recovered, I called on him and said this is the time for me to go back into acting fully, just look at me, there is no helper, I am a single mother, not even a boyfriend. He now said sister don’t worry, I will do all I can to assist you, to make sure you get back on the track but first of all, just take care of yourself. So, I was on his neck, I didn’t give him any breathing space. There was this job he called me for; he was the one who penciled down my name for the job. It was on that set that I met Okiki Afolayan who is now my director. The movie was Liz Da Silva’s job which was titled Inu Fufu. Since then, Okiki has been calling me for jobs. Also, any movie that is coming from Epsalum movie Productions, he makes sure I take part except If i am busy working on another set or he doesn’t see any suitable role for me in the storyline of the flick.

I started my elementary studies from Command Girls School, Army Barrack, Yaba Lagos, from there my father had a transfer to the north and I continued at Army Children School, Kano. Later, we had a transfer back to Lagos and Ibadan, so I attended Anglican Grammar School, Orita Mefa Ibadan, Oyo State. From there I proceeded to Government Technical College, Oshogbo for Business Studies and that is all. I didn’t have the privilege to pass through University.

How did you get into broadcasting?

To God be the glory, wherever my boss is, I called him my Oga. Mr Tunde, he was a staff of LTV 8. I was on his neck and I said Oga get me a job as a presenter and I promised not to disappoint him. So, there was this guy called Tayo Ali who was a staff of AIT before he left Nigeria to settle in the US. He had a programme to run on air and he met with Mr Tunde at LTV8 that he needed a very good presenter who won’t give him any problem, he recommended me and the rest is history now.

How many years did you spend as a presenter?

The programme I started with was Millet Hour, I introduced Millet Meal to the Nigerian market and I co-presented the programme with Adisa Baba Gboin. While that was running, I got another one from MITV titled Logbalogba which I was inviting traditional rulers as guests. If I am to invite the Oba of Lagos, I would have made announcement a week before and the Lagosicians will already be preparing their questions for him and it was a live programme. From there, I anchored Oko Oloyun’s show. I gave the programme Opeleke Extra Ordinary. I was presenting his market to Nigerians. I created the segment myself and it was a live programme as well. Then, Alade Aromire of blessed memory called on me to run a programme on his TV channel at Disk Communication. I started another programme called Gele Odun with him. It was based on the problem that surrounds marriages. While that was on, another man who is now out of Nigeria called me to anchor a programme on Radio Mititi 107.5 and I called the programme Ise Aje on FM. I was a presenter for 11 years.

How strict are you?

There is no point in lying that I am not strict. I am a very strict person. And it wasn’t my fault that was the way I was brought up. This has to do with my upbringing. Till date I am still very strict when it comes to opposite sex.

What role would you say your character as a severe woman has on your love life?

My being strict affected my love life. Actually, I am a single parent but I wouldn’t say my strictness is responsible for my status as a single mother. If you are a kind of person who speaks the truth without minding the consequence, definitely you will have problems. So, I will say that is my major problem. I say it as it is. I do what I believe in and I stand on the truth. Honestly, this question should be a topic for another day.

Continue Reading
You may also like...
Related Topics:olajumoke george