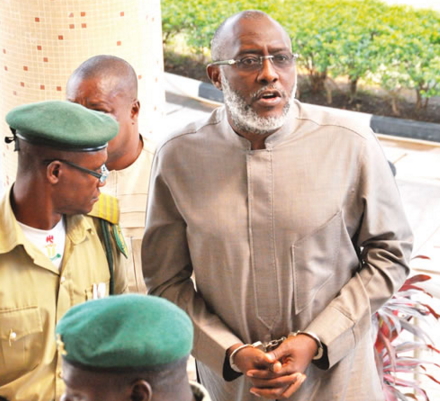 PDP National Publicity Sec­retary Chief Olisa Metuh, has told a Fed­eral High Court that the Eco­nomic and Financial Crimes Commission (EFCC) cannot prosecute him without inter­rogating former President Goodluck Jonathan regarding the source of the N400 mil­lion alleged to be part of arms purchase funds.

Metuh, who has filed a no case submission asking the court to discharge him from the seven- count money laundering charge preferred against him and his company, Destra Investment Limited, said the Prosecution Witness (PW5) evidence that presen­tation for which money was paid was made to

Jonathan makes the investigation of his role as well as his evi­dence vital and indeed crucial without which no prima facie case can conceivably be said to have been made out. Chief Onyechi Ikpeazu (SAN) led Metuh’s defence team.

“Dr. Jonathan, to whom the presentation was made for which the payment was made, is therefore a material and in­dispensible person in order for a prima facie case to be present. Where the prosecu­tion failed to call such a vital witness, a strong presumption will arise that the evidence, if called, would be unfavour­able to the prosecution.

Metuh argued that the EFCC has not established a prima facie case against him in line with Sections 302 and 357 of the Administration of Criminal Justice Act (ACJA) 2015 since the prosecu­tion has not made such case against him and his company.

“In any case, the “mens rea’ of the defendants to the effect that former NSA, Col. Sambo Dasuki (retd) commit­ted a criminal offence cannot be inferred, but must be es­tablished by a competent evi­dence which must come from the prosecution.

It is the case of Metuh that no evidence was laid out by the prosecution that N400 million was the proceed of al­leged criminal conduct com­mitted by Dasuki, adding that if anything, all the documents presented by the prosecution in the case only point out that the former NSA complied with due process and the con­trary has not been pronounced by the court of competent ju­risdiction.

“In this case, by the evi­dence of PW3 who works in the Office of the National Se­curity Adviser [ONSA], the NSA is answerable to the then President Goodluck Jonathan only,” he said.
Metuh said Section 15 [2] [d] of the ACJA requires the proof that the money must be proceed of an unlawful act.

“In this case, it has not been established that the defen­dants knew that the ONSA engaged in any unlawful acts, adding that an unlawful act must be an act which is not authorised or approved and which has been found to be illegal.
“There was no evidence that the defendants were in­volved in any forged docu­ments to create a contract where none was in fact, in existence. “Pw8, the inves­tigator was emphatic that he found no relationship of any kind between the defendants and Col. Sambo Dasuki.”

Meanwhile, Metuh took a fresh plea of not guilty in the amended charge against him and his earlier bail was re­stored by the court.
The fresh charge has noth­ing substantial as it did not alter the earlier one, but was just to correct some legal wordings contained in the previous charge sheet.

Justice Abang Okon, had granted Metuh leave to file his written no case submis­sion after Ikpeazu moved an oral application that was not opposed by the prosecution counsel.
The judge ruled that the de­fence counsel is in control of his brief and at liberty to take any decision or action that was in the best interest of his client.

In granting the leave, Jus­tice Okon directed counsel to file written addresses for and against the no case submis­sion. While Metuh was direct­ed to file his process yester­day, the prosecution counsel upon receipt of service, was directed to reply within three days to enable the defence counsel to reply on point of law within 24 hours.

Further hearing was ad­journed to February 25 for adoption of written addresses.

Continue Reading
You may also like...
Related Topics:efcc, jonathan, metuh