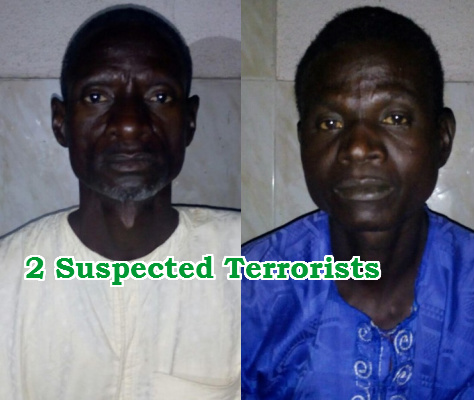 Lately, suicide bombers hit IDPs camps, leading to the loss of lives. This is even as a Boko Haram kingpin was arrested by Civilian JTF.

In one of such explosions on February 9, the IDP camp in Dikwa, Borno State, 58 people were killed and 78 injured.

The military, in a statement issued yesterday, said it is currently interrogating the two men.
The statement reads:

“The Nigerian military has arrested two suspects, Audu Umar and Hassan Umar, for smuggling themselves among the Internally Displaced Persons (IDPs) brought from Pulka to Gwoza Camp in Borno State.

“The male suspects, who gave their names as Audu Umar and Hassan Umar, are undergoing interrogation by the military and intelligence operatives.”

Meanwhile, the military is yet to confirm the speculation of an arrest of a Boko Haram kingpin, popularly known as Bashir Sarkin Yanka, which in Hausa means “Bashir, the king of slaughter.”

The spokesperson of Operation Lafiya Dole in the North-East, Air Commodore Dele Alonge, said the military cannot confirm the arrest of Shekau’s actor even as the military has sustained its counter-insurgency operations where some terrorists have been eliminated and others apprehended in the North-East.

Alonge said: “As you are aware, the Nigerian military has succeeded in routing terrorists from some of their hideouts in the North-East and in the process, some were eliminated and others have been arrested. We cannot at the moment provide the identities of those in our custody or in other places until after we have conducted thorough investigations.”

The Civilian JTF in Konduga Local Government Area of Borno State claimed that it had arrested a notorious Boko Haram kingpin, named Bashir who had been acting as Abubakar Shekau in the social media.

The suspect has confessed to the Civilian JTF that he had acted as Boko Haram leader, “Shekau” in some videos and was responsible for the death of his (Bashir’s) mother, two sisters and brother apart from engaging in mass slaughter.