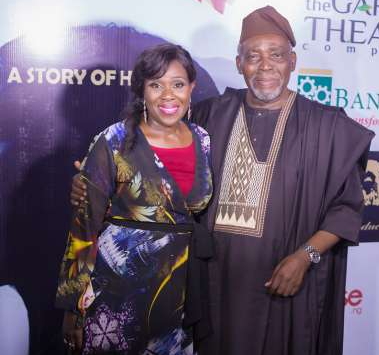 Having assisted filmmakers and fashion designers through different funding schemes, the Bank of Industry (BoI) continues its support for the creative industry, the latest being a stage performance produced by veteran actors and couple, Olu Jacob and Joke Silva, titled Heartbeat The Musical.

A series of 28 shows spread across 19 days, the theatrical masterpiece, is anchored on the fictional Grace House, a well-known shelter for the homeless, where the play explores the themes of love, hate, betrayal, family, identity, politics, homelessness and social justice through music and dance .

Depicting the everyday life and political terrain in Nigeria, ‘Heartbeat’ makes an effective portrayal of happenstances in the society with such theatrical presentation that had the audience glued to their seats for more than one hour, cheering the cast for great acting and elevated musical dialogues as the characters converge in and around Grace House in search of refuge and atonement.

Speaking at the November 17th show at the Agip Recital Hall, MUSON Center, Lagos, Bank of Industry’s Director of Large Enterprises, Mr. Babatunde Joseph said the play was worth his while.

The play parades not less than 33 cast and 10 crew members, including popular actor, Femi Jacobs, who plays the role of JD Dacoster, the corrupt politician who seeks atonement in the end.