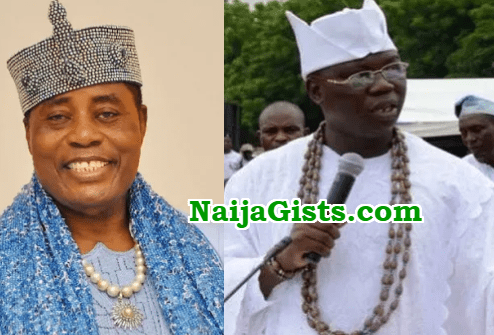 The cold war between the Aare Ona Kakanfo, Chief Gani Adams and the Olugbo of Ugboland, Oba Frederick Obateru Akinruntan knows no end as the Federation of Ugbo Kingdom Youth Association, has described Adams as a common chief whose position is outdated in line with modern day system of government.

Adams had attacked the Olugbo of Ugbo Kingdom in Ondo State, Oba Fredrick Obateru Akinruntan, for declaring that he was the highest Oba in Yoruba land and crowning Yoruba Obas in the Diaspora.

“What arrogance! What impudence! What uncultured remark! On what authority is he crowning Yoruba Obas in the Diaspora? Who told him that nobody can query him? He said he remained the number one king in Yorubaland. Which Yoruba history is backing this arrogance?”

Reacting, Comrade Gbenga Demehin, President General, Federation of Ugbo Kingdom Youth Association, said traditionally, the duty of Adams consisted of raising and keeping an army for the security of the Alaafin, a role, he said, had been taken over by the armed forces.

“Gani Adams should not be disillusioned by himself or others to think he is in any way a custodian or protector of Yoruba culture so much so that he develops the effrontery to speak against Yoruba traditional institution at will, and we believe, without the consent of Alaafin of Oyo, Oba Lamidi Adeemi III, who is a repository of knowledge and a monarch who does not compromise Yoruba cultural standards.

“Gani Adams, who is an ordinary ceremonial chief, an height that has been attained by numerous Yoruba sons and daugher, does not in any way have an exclusive right to install other chiefs under him, using certificates that are attached to his title, Aare Ona Kakanfo, and worse still addressing those illegal chiefs he installed, as of Yorubaland,” he said in an advertorial.

“we are told of how Gani Adams parades himself as an oba in utterances and actions up to the point of waiting for monarchs to sit at functions before making a noisy entry into such events. Vainglory at its peak. Chief Gani Adams, who obviously is in error, should have shown his enthusiasm about Yoruba culture by raising propaganda against the Ooni of Ife, Oba Adeyeye Ogunwusi, who crowned a white man in his palace with the complete paraphenalia of a Yoruba king.”

He added that Adams actually amplified his show of ignorance by writing to state governments and addressing governors in relations to this matter, as there was no constitutional basis for his action.

He advised Adams and his cohort to desist from acts capable of causing chaos in Yorubaland, while he defended the title given by the Olugbo to people in Diaspora.

It is indeed a throwback season among the Royal class.