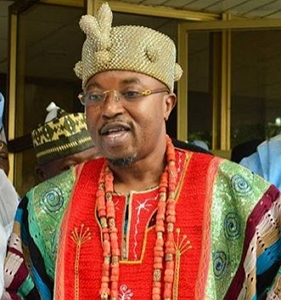 A mild drama took place over the weekend in Port Harcourt, Rivers state capital, when the Oluwo of Iwo, Oba Abdulrasheed Akanbi Adewale, unexpectedly left a public outing without recourse to the schedule of the programme, as planned by the organisers.

It was at the grand finale of the week-long Yoruba Community week, held at the Civic Centre, Port Harcourt. The programme was organized by the Yoruba community in Rivers state led by Chief Bright Alabi.

The programme, it was gathered, started about 1pm, with prominent dignitaries like the Aare Onakakanfo of Yoruba land, Iba Gani Adams, Oba Oladimeji Musbau, Oba Yoruba in Imo State, Alhaji Taiwo Mustapha, Chairman Board of Trustees of ANALCA, Olori Odunola Sijuade Olubuse, and several others in attendance.

The Iwo monarch, it was gathered, came late to the event, that was around 4pm, but he allegedly left immediately he noticed that his picture was omitted from the programme brochure. The action which the organizers was not pleased with.

Meanwhile, Aare Gani Adams, whose picture was also omitted in error, stayed behind with other dignitaries.

Speaking at the event, Aare Adams appealed to the Iwo monarch to join other Yoruba monarchs in promoting the race and protecting the sanctity of the stool.

He also charged all Yoruba sons and daughters in the state to embrace peace and work together as one united family.

Adams, however, berated the Rivers state Governor, Nyesom Wike, for saying the Yorubas have no electoral value.

‘I have it on good record from one of the leaders of Yoruba community in Port Harcourt that the governor allegedly said the Yorubas have no electoral value in Nigeria’s politics. That comment as far as I am concerned, was uncomplimentary to us as a race with over 200 million people across the world.

It is sad too that such comment came from a person that lives on peoples’ patronages, particularly, a governor that had in the past, enjoyed the supports of the race all through his political career.

Today, as I stand before you, it is my hope and prayer that governor Wike moves higher in his political desire and aspirations to the level where he would need the support of the Yoruba people either in the state or at the national level, then we will show him how important the race is in Nigeria’s politics and the world at large.”

Adams noted also that the omission of his picture and that of the Oluwo from the event brochure was done in error, saying there is the need to encourage the organisers of the programme for putting up such historic gathering.