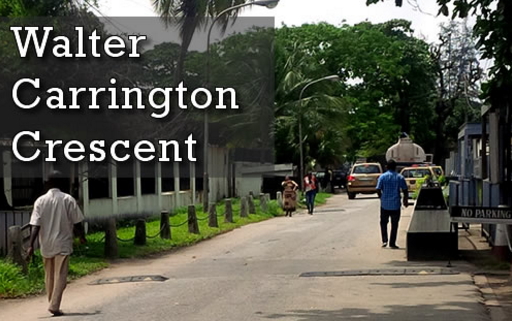 The DPO in charge of Bar Beach Division, Victoria Island, Lagos, Western Nigeria, CSP Segun Ajamolaya, has led his men to dislodge all the suspected touts constituting nuisance and harassing visitors to embassies on Walter Carrington and Eleke Crescents in Victoria Island.

During the raid, five suspects were arrested, while others escaped.

A police sources said the DPO swooped on the touts to ensure a conducive working environment for visitors to all the embassies on Victoria Island following intelligence report that suspected touts were constituting nuisance in the area.

During investigation, according to the police, all the arrested suspects could not satisfactorily explain their mission at the embassies.

After investigation by Coporal Mobolaji Temitope and her team, all the suspects were arraigned before an Igbosere Magistrates’ court, Lagos on a one count charge of felony to wit, conduct likely to cause breach of peace by harrasing innocent citizens visiting the embassies on Walter Carington and Eleke crescents, Victoria Island to proccess their travel documents.

The police prosecutor said the offence the accused persons committed is punishable under section 166(d) of the criminal law of Lagos State, 2011.

All the accused persons pleaded not guilty to the police allegations in the open court when the charge was read to them.

Therafter,the presiding Magistrate, Mr O. O. Owumi admitted them to bail in the sum of N50,000 each with one surty each in like sum.

Owumi adjourned the case till 9 March, 2016 for mention, while the defendants were taken to Ikoyi prison pending when they will fulfil their bail conditions.