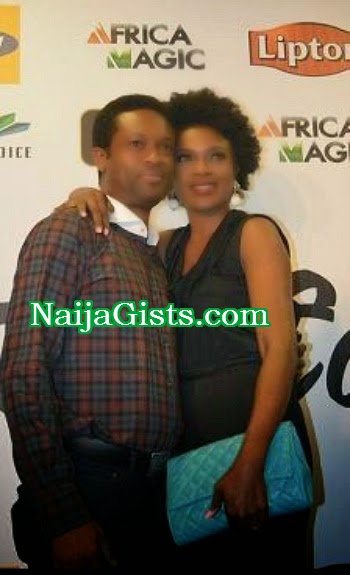 Sometimes when you attend an event and it gets to the boring segment, you tend to chat with friends on your black berry phone, that was my situation when l heard a whisper ‘ How can he come dressed like that’ l looked up quickly, l realized it was Omoni Oboli’s hubby Nnamdi that was the topic. But really why would he attend such an event dressed like her driver or let me say it mildly her PA? Omoni was decked in her yellow and black evening gown, walking in front of her husband majestically while he walked behind carrying her goody bag given by Amstel Malta.

If he was properly dressed for the event they would have looked like another power couple. He wore a casual shirt over a black pant, his humble demeanor and amicable attitude cannot be ignored, he is obviously a complete gentle, a loving and a supportive husband who loves to be casual all the time beside his pretty glamorous wife but biko, he should also learn to respect dress codes of events.

I didn’t say he should wear a Gucci or a Billionaire jack, we have great designers like MAI ATAFO, Okunoren Twins, Jasonporshe bespoke, McMeka, Clothes Sense and many others, they could knock together a nice tuxedo or a bespoke suit for him.

My darling sister try look into oga’s wardrobe when he is attending such glamorous events with you. After the event when he gets home he can throw the suit in a trash bin, or he can dump it in an obscure corner of his wardrobe.

My dear, make u make proper adjustment before they start saying you have put oga’s head inside calabash.