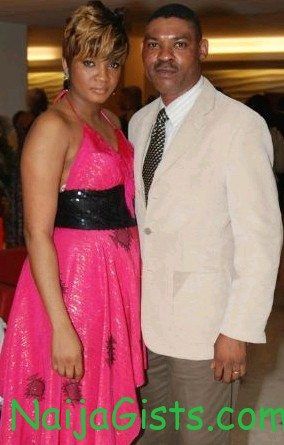 According to a source who sent NaijaGists an email a couple of days ago, the beautiful mother of four is fond of beating her husband at the slightest provocation.

Contrary to her popularized 35 age, insiders said the reality talk show host is now over 40.

Captain Matthew Ekeinde, an easygoing man who married the actress at a tender age of 17 is a gentle man by nature.

“During the course of their marriage, Captain Ekeinde has never beat the actress simply because he adore her” said the source.

Before we start pointing accusing fingers, let’s wait for her own side of the story.