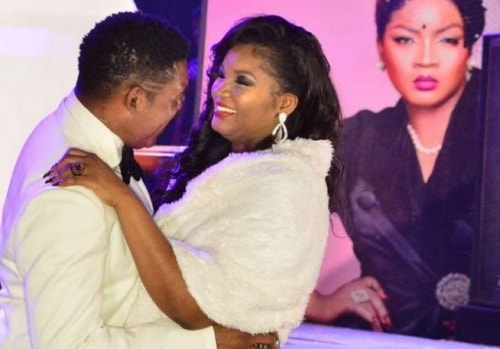 The most dominant name in the 20 years plus history of Nollywood, Omotola Jalade-Ekeinde turned 40 recently and the event was celebrated as a carnival of sorts. The actress kicked off her birthday events with a party for widows and orphans in Lagos on February 7, which is actually her date of birth.

Earlier, she had announced the coming of age birthday as a five-day celebration tagged #Omotola4point0. Speaking at the event, Omotola said: “I have always had a soft spot for widows and orphans for many years now because I can relate to their plight. My mum was a widow for 10 years before she passed on about 16 years ago. I am also an orphan, so I’d know what it feels like to be an orphan.”

The party was followed by Couples Retreat themed “Reciprocate, Respect, Mental Health And Avoiding Slavery In Marriage” which held on Thursday and a “Renaissance Trip To Trace The Beginning Of Slavery” and symposium on “Mental Slavery And The Emancipation Of The Black Race” on Saturday.

The Omosexy Ball was the climax for the actress who made her debut back in 1995 in the critically acclaimed movie, Mortal Inheritance, a movie in which she acted the role of a sickle-cell patient who fights for her life despite the odds of survival.

That film is regarded as one of Nigeria’s classic movies till date and Omosexy as many of her fans call her, has notched up hundreds of roles thereafter, with Games Women Play, Blood Sisters, All My Life, Last Wedding, My Story, The Woman in Me, Last Flight to Abuja, Alter Ego, among others.

Apart from a few like Mortal Inheritance, Omotola rates Chineze Anyaene’s 2010 film, Ije, shot on locations in Jos, California and Los Angeles and also featuring her supposed rival, Genevieve Nnaji, among some of her best efforts. With being named among TIME Magazine’s 100 Most Influential People in the world, the biggest honour any Nollywood personality has attracted, Omotola, in terms of art and craft, plans to continue to power on.

Continue Reading
You may also like...
Related Topics:actress, most honoured, nollywood, omotola jalade