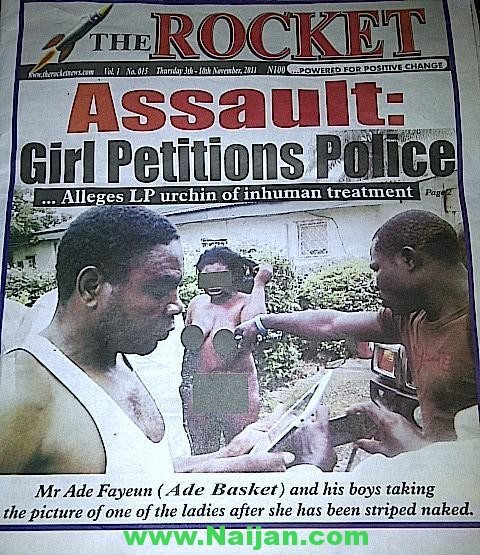 Do you remember the story of a man called Ade Fayeun popularly known as Ade Basket who brutally battered 2 girls in Ondo state after sexual encounter with them stating they stole his money.

He has been declared wanted for sex assault and theft over N9,000.

The street character with political influence had on Friday October 21 2011 ordered his followers to strip four girls to their skin and made them parade naked around a couple of streets in the state capital, Akure.

Some of the pictures have phone their way onto the internet courtesy of Ade’s aides- while others have become one of the most passed around on phones in that part of the world.

The girls were alleged to have stolen N9000 from him when he slept with them over night in an hotel room.

He meted out the treatment to the four girls when he claimed he couldn’t find the money where he kept it- and pain staking search of the girl couldn’t unearth the missing sum.

After the treatment that resulted in the girls also suffering a couple of slaps and kicks- one of the victims, Miss Dayo Richards wrote a petition tagged ‘Complaint of assault, inhuman and degrading treatment done to me by one Mr. Ade Fayeun (aka Ade Basket)’ to the commissioner of police, Ondo State.

Informants claimed that the police ‘arrested’ Ade Basket on the strength of this petition but just like he allegedly boasted when ‘dealing with the girls, he used his influence to get himself out of the hook’

Ade Basket became popular in the state as a political muscle for sacked governor Olusegun Agagu. He is believed to be close to the government of incumbent Gov, Olusegun Mimiko.

His political links and ‘easy release’ by the police have kick started a furore over the development.

Human rights canvassers have started a campaign for Ade to be arrested and prosecuted for ‘his acts against womanhood’. The opposition party Action Congress of Nigeria are stridently calling for his prosecution as well. And to worsen his case, same for the Ondo state Government.

Pictures of the assault victims 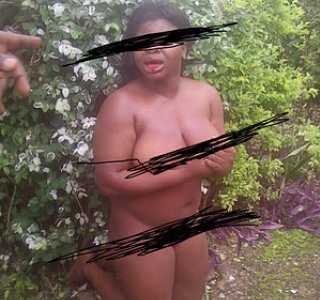 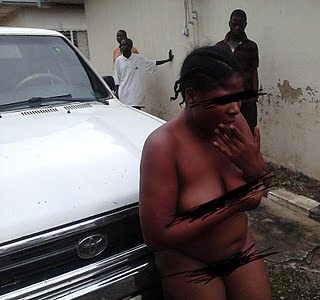 The government through the commissioner for information, Kayode Akinmade and Women Affairs, Olayinka Alabi maintains ‘all those responsible will not go unpunished’

The pressure these public furore have brought to bear on the case is said to have forced the police to begin a fresh move to arrest Ade Basket. He is said to be trying to tap into his wealth of influence to dodge arrest and prosecution at press time. (Society Now)