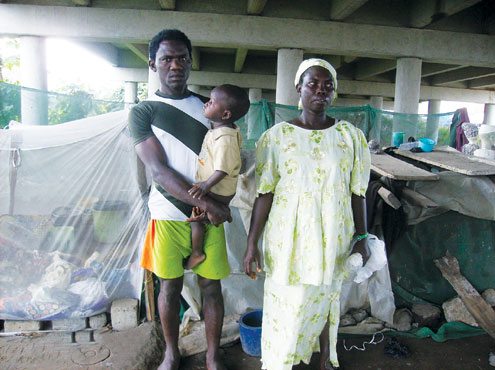 Monday Obuh & Wife Under the bridge

Monday Obuh, an unemployed man is currently raising his family under a bridge at Cele, Lagos simply because he’s got no money to rent an apartment.

After a painful eviction and demolition of their home,  Monday and his wife, Dupe Obuh, and  their son are now residing under the bridge at Cele on Oshodi- Mile 2 expressway, Lagos State, southwest Nigeria.

Mrs Obuh who is pregnant makes a living by selling pure water.

Unfortunately, the couple and their child are living in the same area with dangerous reptiles such as snakes and cats that disturb them at night.

They have been living there for the past two years after they were evicted from their home at Itire area. They hardly eat let alone being able to raise money to rent an apartment.

They cleared a section under the bridge and used mosquito net to construct a makeshift  room and parlour apartments.

Despite the pains and challenges of living under the bridge with snakes and cats, his wife told P.M.NEWS that she would not abandon Monday because she loved and married him seven years ago when things were rosy for them.

She said her husband raised N200 which she uses to  buy and sell ‘pure’ water.

She said she makes profit of between N30 to N60 daily, while her husband is jobless because he could not find work to do.

Dupe hopes that someday God will remember them. She said her family wants her to dump her husband because of his condition but she refused, insisting that marriage is for better and for worse.

Because of her obstinacy her family abandoned her to her fate. She hails from Ilesha, Osun State.

Recalling his predicament, Monday said he was an employee of a textile company which is now moribund and when the company closed down, he became jobless.

He said after some years, when the construction of Cele bridge started, he was employed as a labourer there and was sacked when he returned from his late sister’s burial.

He was out of job again and his apartment was eventually demolished and since then he has been raising his family under the bridge.

Monday also said that he wanted to go back to his village in Edo State, but he does not know the place because he was born and raised in Lagos.

He said his parents are living in Lagos and they have no money to assist him  rent a house.

He added that his parents arequite old and needed his help but he could not assist them.

He lamented his ordeal in the night since he started living under the bridge.

According to Monday, snakes and cats usually disturb them and attempt to enter their net.  He said he wards them off with sticks and stones.

He said he was not handicapped in any form, saying that his problem is just to get a job which will enable him raise money to get accommodation and raise his family properly. (Cyriacus Izuekwe &  Ayodeji Dedeigbo)

Whaoo what a sad story. God will surely remember them according to their faith.

What is our government doing to help homeless people in this country?