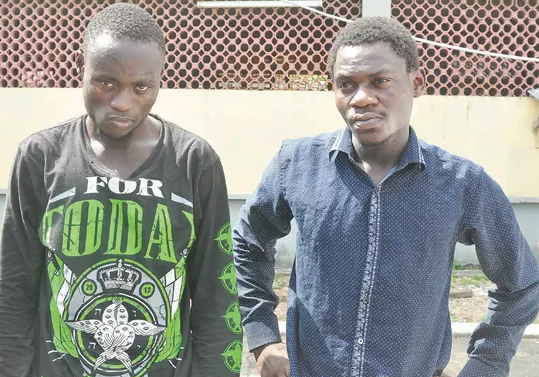 2 graduates of Delta State & Gateway Polytechnic have been arrested for attacking a lady while robbing her.

The suspects told police they stabbed their victim while she was attempting to shout during their robbery operation.

Hear what 25-year-old Richard Orji and 24-year-old Desmond Pedro said while chatting with journalists on Tuesday:

“We carried out this operation on our way to visit a friend. We were just strolling when we noticed a particular building. The house did not have burglar proof. We decided to enter the kitchen window. “We met a lady inside the house. That was how we started our operation. We collected some items from her, including her Black Berry Bold 5, E5 Samsung and Ipad.

We also went away with N5,000. While we were on the operation, we stabbed her for shouting. I (Richard Orji) was the one who stabbed her. After I stabbed her, I and Desmond (Pedro) seized the opportunity to rape her; we both raped her twice.”

“We sold her phones to an engineer, who displayed it on his show glass. Unfortunately, the victim and her friends were going out one day when they saw her phones on display. She ran to the engineer and asked him where he got the phones. The engineer said two guys sold them to him some days ago. She reported the matter to the police. We were arrested.”