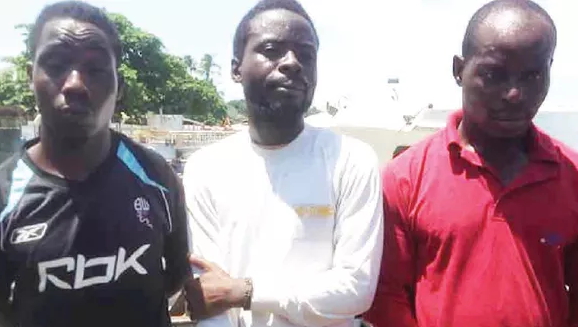 4 Nigerians, who smuggled themselves into a Malaysia-bound cargo vessel have been arrested. The stowaways are 24-year-old Ahmed Azeez, 33-year-old Tunde Yagba, 33-year-old Ajose Kehinde and 25-year-old Adewale Sunday.

The suspects all indigenes of Snake Island village behind Tincan Island Port, Lagos stole a canoe under the cover of darkness and paddled to a Malaysian-bound cargo ship MV Maersk Casablanca.

“The vessel was berthed at Tincan Island Port. They trespassed into the vessel. They dived into the water and sneaked through the propeller into the manhole, where they hid themselves in a small compartment.

“Exactly 23 hours after the ship had sailed, my intelligence group from the Amphibious Ambush Squad (AAS), alerted me of the presence of some strange elements in the vessel. We quickly alerted our operatives at Onne Port, in collaboration with the men of the Nigerian Immigration Service (NIS) who played a commendable role and they were found and arrested. One of them (Adewale) was bleeding profusely as a result of injury he sustained in the process while sneaking into the vessel.”

Adewale is currently admitted at an hospital in Lagos because of an ulcerous wound.

Continue Reading
You may also like...
Related Topics:Desperate, malaysia, Nigerians

“My Wife Is A Witch” – Ilorin Girlfriend Killer Begs For Time For Deliverance
One Chance Robbery: 2 Poly Graduates Who Raped & Stabbed Lady @Her House In Ajah Lagos Arrested