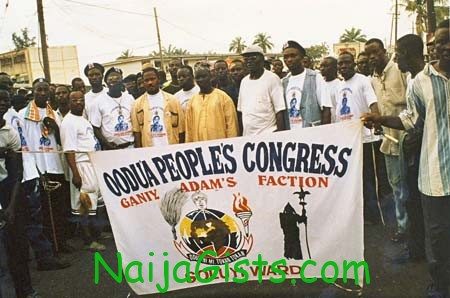 The members of the Oodua People’s Congress, OPC, have forced a 36-year old commercial motorcyclist (Okada rider), Morufu Adelakun, to divorce his wife of twelve years.

The incident occurred at Raji Street, Agbotikuyo, Dopemu, Agege, Lagos office of the OPC after a fight between the Okada rider and his wife, Oluwashola over her alleged infidelity with the OPC boss in the area.

Adelakun while giving evidence in a divorce suit filed against him by his 33-year old wife, at an Alimosho Grade ‘A’ Customary Court, Lagos, Southwest Nigeria, told the court that he was forced by OPC men to sign an undertaking to divorce his wife with immediate effect.

A copy of the undertaking which was tendered in court by his wife stated: “I, Morufu Adelakun, promise that the marriage between me and my wife has ended with immediate effect.”

The father of three who told the court that his wife left their matrimonial home on April 3, under the pretext of going to see her parents in Abeokuta, Ogun State, said that he was riding his motorcycle on the fateful day when he was asked to take a woman who had miscarriage to the hospital.

He said he was shocked to see that the victim he was asked to take to the hospital turned out to be his wife who abandoned his three children at home after a quarrel few weeks ago.

“Initially when she left home, I thought she went to her parents’ house. Since then, I have been making efforts to reconcile with her so that she can come back. I met her parents but they told me she was not with them. I even called her pastor and he promised to do something about it.

“Infact, both families intervened in our misunderstanding but she refused to come back home. Anytime I called her on phone, she would tell me that she was in Abeokuta, Ogun State not knowing that she was in another man’s house. On the fateful day, I was on Kusoro Street, Funmilayo, Dopemu, doing my busines when I was called to take a patient to the hospital. Infact, I was suprised to discover that the victim of miscarriage I was asked to take to the hospital was my wife.

“I was so mad that I created a scene. People then told me that she had been married to an OPC leader in the area for over a year now and that the man was responsible for her lost pregnancy. When I did not allow another motorcycle to carry her, her friend called some OPC members who took me to their office and forced me to sign an undertaking to divorce my wife,” he explained.

Giving her reasons for abandoning her matrimonial home, the petitioner told the court that her husband turned her into a punching bag at home, adding that she left when she could no longer bear the maltreatment.

According to the hairdresser, “I am not married to any OPC man. Though they made him sign an undertaking, they used that as a ploy to scare him so that he would stop beating and harassing me. When I left his house, I put up with a friend in Abeokuta, Ogun State and came back to Lagos few weeks ago to honour this court hearing.

“When he saw me, I was having stomach pain and not miscarriage. I was just treated for typhoid fever and I took some drip also. So the nurse that treated me told me that I have to do a scan to know the kind of treatment to give me for the stomach pain. We were about going for the scan when he saw me. Infact, I did not even know that he was the Okada man called to take me to the hospital because I was far behind the nurse who called him.

“When he saw me, he started beating me and created a scene. People around asked him to leave me but he would not listen. We got another motorcycle and he did not allow him to take me to the hospital. The rider pleaded with him but he refused.

“It was the Okada rider who was an OPC member that called his people and not me,” she told the court.”

A mild drama later ensued in the courtroom when the petitioner who had earlier accused her husband of constant beating, night crawling, lack of care and threat to life, begged the court to resolve the matter amicably between them.

Adelakun rejected her pleas. He conceded custody of her last two daughters, seven and five years old respectively, to her with the promise to pay their school fees and food allowance regularly.

After listening to the parties, the court ordered that Olushola be allowed to pack her belongings from the respondent’s house and adjourned the matter for further hearing.(PM news report)