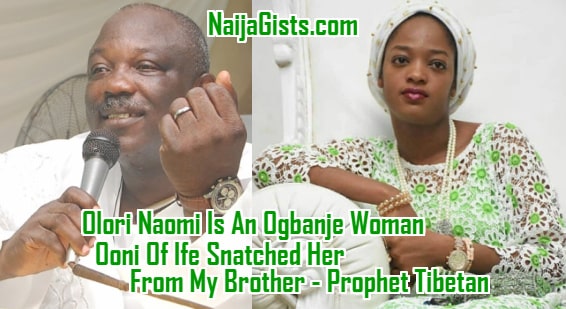 In this exclusive chat with Asaba Afrika TV, popular Prophet MKO Tibetan, the leader of the Celestial Church of Christ, Elisha Parish comes after the Ooni of Ife, Oba Enitan Ogunwusi for snatching Naomi Shileola from his younger brother.

He claimed that his brother, a journalist simply identified as Bolanle who once worked for Jimoh Ibrahim was the fiance of Naomi before he sent her to the palace to solicit for fund.

In this new chat, Prophet Tibetan went deeper into the real story behind the marriage of Princess Naomi into the palace of the youthful Ooni of Ife and why the Yoruba nation must not sanction such an act in this contemporary time.

The Prophet who promised to reveal more should necessity warrant, gave a profile of the new queen and why she married the Ooni.

The cleric equally corrected his early assertion that Prophetess Naomi’s ex was a staff of Oba Akinrutan’s OBAT Petroleum and Gas company. He said the young man never worked with the Olugbo but with Nigeria’s billionaire entrepreneur, Barrister Jimoh Ibrahim (OFR).

The video of the interview has been removed on Ooni of Ife’s request.

In the interview, the cleric said Olori Naomi Ogunwusi is an Ogbanje. He further slammed the monarch for snatching his brother’s wife because of his long-throat.

If you missed his previous explosive interview, watch it here.