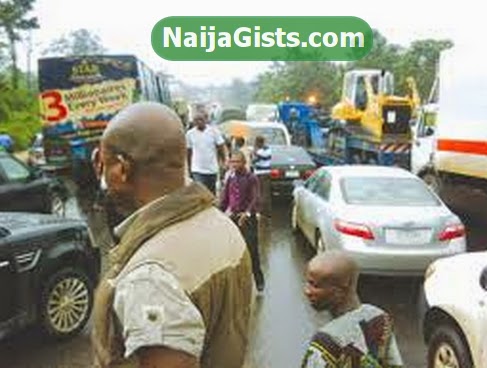 This letter was written by London-based Nigerian journalist, Dare Lasisi over a robbery attack on a British woman during her vacation in Ogun State Nigeria.

I am deeply sorry for writing this open letter to you since I do not know your contact address to pass my urgent message across to you.I also wish to apologise if I wrongly addressed you as ‘Highway Lords’.I initially thought of addressing you as ‘Commander-in-Chief’ of armed forces, but that sobriquet may upset President Goodluck Ebele Jonathan JP who just departed London and I don’t wish to see the red eyes of the Otueke brother,not because my CV is currently on his table for ‘political appointment’ approval if he wins in 2015 general election.I am just confused on how best to address you.It is an understatement to address you as ‘Armed Robbers’.

Let me go straight to the ‘mission statement’ of this open letter.My London-based sister Kay Kay(KK for short) has just informed me on how your dare-devil members attacked and robbed her in Ogere town of Ogun state last week Wednesday on her way from Ilorin to Lagos to board a plane back to England.She recounted all the trauma she suffered along with her twin sister under your authority.

They would have been murdered in cold blood if they had not listened to your draconian commands.So glad they all co-operated with you and you did not kill them.From the bottom of my heart.I say thank you for your rare kind gesture and ‘humanitarianism’.

At gun point(or knife-point!),I learnt you also snatched their handbags containing their passports(Nigerian & British) and sizeable amount of money.Fear momentarily navigated down my spine when Sister KK told me the whole tragedy.But why Sister KK?A humble lady that could not even hurt a butterfly!

Zik of Africa once said only a fool would argue with a man with a gun,loaded or unloaded.Thank God Sister KK and her twin sister did not argue with you like that ‘born-again’ Christian lady in Lagos that rudely challenged you to shoot because her body was the temple of Christ that bullets can never destroy.

Let me inform you that Sister KK is also an Alfaress(female version of an Islamic scholar!)but she would never argue with anybody with a loaded gun or any ‘weapon of mass destruction’ .You may tell me to preach that sermon to the marines(maybe US Marines!).It is not your business if I tell you that Sister KK had memorised the Holy Quran right from her teenage years, the feat I am still struggling to attain as at the time of writing you this open letter.That’s my personal wahala not yours!

Highway Lords,I learnt you also ransacked and damaged her luggage and carted away valuable items at gun-point.I am happy you did not kill Sister KK.I am still mourning my evergreen sweet mother checkmated by death over two years ago in Abeokuta and not ‘cool’ to be mourning another sister.

Glory be to Highway Lords(sorry I mean Almighty God!) that Sister KK is still alive till today.We(Nigerians in London)would have been deprived of one of the best Tuwo cooks that ever lived.No wonder she earned the nickname of ‘Madam KK Tuwo of London.’

The first time I tasted KK Tuwo with assorted meat in South London.I thought it was produced by the Malaikas.I enjoyed it to the extent that I nearly broke protocol to lick my plate.I could not ask for more for the fear of being tagged as a shameless glutton!

Highway Lords!Can I quickly advise you to stop shedding the blood of the innocent people?You’ve ruined many homes and killed many dreams with your guns and bullets .You’ve plunged many families into eternal grief and setback with your cowardly acts.

Sister KK was virtually moving from ‘pillar to post’ as she moved from one police station into another before securing a police report to show at the British High Commission in Lagos.The rest is now history and a bitter experience to linger for ever in her gentle heart.

Let me quickly drag you down the memory lane when the foremost American Civil rights leader,Dr Martin Luther King Jnr was stabbed by a demented lady.On 20 September 1958, Izola Ware Curry, a forty-two year old mentally disturbed woman, stabbed Martin Luther King, Jr. while he signed copies of his book ‘Stride Toward Freedom’ at Blumstein’s Department Store in Harlem, New York.The sharp weapon employed by this sicko narrowly missed the artery next to King’s heart by an inch.It would had been a fatality and the doctor that revived Dr King said to him on his hospital bed : ‘Thank God Dr King did not sneeze after the stabbing!He would have been covered from head to toe in his own fresh blood.”

Thank God armed robbers did not hurriedly parcel my dear sister KK to the other side.Thank God I am not mourning her right now.Thank God KK did not argue with these undesirable elements.Thank God I am shouting ‘Alihamdulihah’ from the rooftop that my dear sister KK survived the tragedy and she is still alive in London and not really sure of her ‘return trip’ to Nigeria,her fatherland.

How can I forget the wonderful assistance of visa officials at the British High Commission in Nigeria who quickly facilitated their safe return to London?What else to say than to just start thanking God for saving the life of our beloved Sister KK?

Once again,thank you for sparing the meaningful life of my dear Sister KK.I hope you’ll turn a new leaf in the new year.Where is Oyenusi today?Where are the Aninis?Can you help me trace the Osunbors?Even ‘Shina Rambo’ is now a ‘Man of God’!

As the foremost Nigerian investigative journalist and erudite prose stylist Dele Giwa once quipped :”No evil deed shall go unpunished.Any evil deed done by man to man, if not addressed and redressed now,maybe later,if not by man,then by God.For the triumph of evil over good is only temporary.”

Thanks so much for reading my long open letter(I am not Chinua Achebe but I love storytelling anyway!)