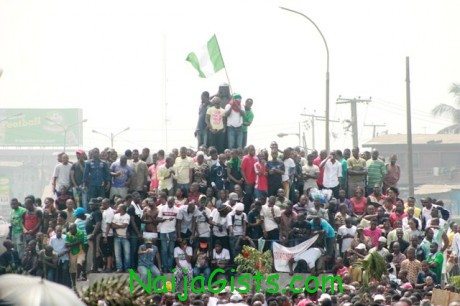 President Goodluck Jonathan’s New Year surprise and the major happenings of the past week have proven to be a pivotal time for us as a people. The happenings have also proven to be a coming of age for my generation as a whole. I write as a member (not representative) of a generation (80’s baby and proud) who have been too young (June, 12 1993 anybody?), too cool (come out for an S.U.G protest? Really?) or too cynical (the largely social media driven campaigns  of the past year) to even be bothered with any form of protest. But somehow our president’s decision to remove subsidy from petroleum products without putting the necessary palliative cushions (the 25% cut in basic salary and 1,600 buses offered only barely scratch the surface) in place riled up something deep in us to brush away the indifference of past generations (Read: our parents) and come out in trickles and droves to support what has been deemed a worthy cause. News programs have seen a jump in ratings, helping to fuel the ongoing discourse on major social media platforms and the march, drive or ride to the protest sites have been likened to a pilgrimage for some, a step towards our political awakening akin to the Hajj or the Re’iyah.

This decision to take a stand however has not been without its own share of alternate views. Nothing has been left to scrutiny or criticism of the wary with everything being put under analysis. For starters, the choice of name; Why Occupy Nigeria?  Why couldn’t it be something else?  Do we have to be copycats all the time? Can’t we be original just this once? True the influence for choice of name isn’t far-fetched but wasn’t it William Shakespeare who said a rose by any other name would still smell as sweet? The whiff in the air right now could be named anything but the spirit behind it stays clear: that we are tired of the high handed nature of those who govern us and there is a need for them to be put in check, the subsidy removal a mere trigger to other deep seated issues within government. Plus I doubt our founding fathers gave themselves sleepless nights worrying over what to call our independence (autonomy, freedom, sovereignty) just because India got it from the British first. There are simply bigger fish to fry.

The manner with which we choose to operate has also not gone un-noticed. Reports coming from North and Abuja especially portray the protests as having gone on with an air of solemnity. In Lagos on the other hand, the protests have taken on a carnival like spirit with artistes: in vogue and has-beens alike taking to a grand stage to the delight and sometimes dismay of protesters with food and drinks openly sold on the protest grounds. Juxtaposed against the Arab spring or the more recent Occupy Wall Street protests, ours was more like a jamboree. But isn’t that us injecting our protests with the necessary ‘Nigerianess’?  Let’s be honest, as a people and down south especially we really don’t do solemn well. Burials ordinarily deemed to be a time of sober reflection on the life and works of the departed become full blown displays of revelry. Not like we care less but we tend to see the celebratory side to everything. That now includes protests.

In all, even the contrary voices have been a round-about show of support, pointing out the supposed flaws in a bid to make the protests more focused. A positive role in itself as other parties try to circumvent the process for their selfish motives. Whatever the outcome of these protests, whatever decisions are finally reached, we have scored one true victory in our ability to come together in unprecedented numbers to stand up to what is largely viewed as a mis-step on the part of the government by all and sundry.

Article by: *Fayanjuola who is a Lagos-based writer