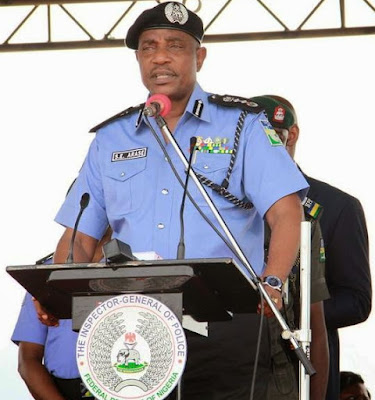 IGP SOLOMON ARASE carrot and stick approach to our modern day policing will in no doubt make Nigeria Police Force, one of the best in the world.

The display of Arsenal and exhibition of professionalism before and during the Hand-Over ceremony is one that keep many wondering whether the officers and men were imported from Canada, the massive crowds management that graced the Eagle Square Abuja when President Mahammadu Buhari took over the mantle of leadership is one that could compete in whatever standard around world, as jubilating mood reigns the air all through.

Without fear of contradiction, I dare to say Nigerians are the most law- abiding citizens in the world, what we lacked all these years is a leader with sense of direction for the followers to emulate, once the Head is good be rest assured that the followers would also follow suit, and this explains the hope that accompany the wind of Change with President Mahammadu Buhari on the exhorted throne, and if our Police men are now conducting themselves in professional manner kudos should as well goes to IGP Solomon Arase.

Whether this gesture by the Nigeria Police Force is what we call in our local parlance ‘initial gra gra (IGG) remains to be seen but one thing is certain, for those who know IGP Solomon Arase too well he does not pretend, as he could be rated belonging to the class of disciplinarian.

Stop The Bribes campaign has been on for quite some times now but no time was it given the deserved priority than now, as public are now warned to stop inducing Police men with bribe and if any Police man ask for bribe do not give, this become necessary because President Muhammadu Buhari is no nonsense man and with this era of change be rest assure that corruption would be nip in the bud, and for a corrupt-free society all hands must be on deck to stem the tide, whereas any one find culpable shall face the wrath of the law.

While it is difficult to assume the unthinkable with Nigeria Police Force, it is also important to note that the welfare of these officers is given a needed boost since corruption and welfare are synonymous in the principles of IGP, a well- fed, well-equip, affordable housing, the logistic in carrying out day to day routine, would not only but make Nigeria Police Force dedicated to his work than engaging in unnecessary frivolities which may not be tolerated in this era of Change.

The culture of impunity, public harassment, societal neglect and anarchy must stop, and this explains the recent reform put in place by the IGP, as Nigeria is on the threshold of history with this wind of Change that blew across the breath and length of the country.

Poor funding over the years and corruption within the Nigeria police had limited its capacity to perform in a country of more than 170 million people, more so that its personnel is minimal in comparison with the population of the entire country. However, this is not to justify its ineptitude but rather over the years, the missing link in the Nigeria Police Force is the social content in its day to day policing where legal actions are often criminalized, because of poor management with those concerned, but with capacity building in line with International best practices orchestrated by the IGP, Nigerians may have every reasons to believed Police is indeed their friend.

Unlawful detention and inability to access bail for free despite the bold inscription in most of the Police Stations that BAIL IS FREE, is one that IGP Solomon Arase still insist public stood by it and warned that, the Rank and File found wanting in this area shall be dealt with, thus our justice system requires speedy response to making sure individuals are accommodated within 48hours, since the Nigeria Police would no longer contravene the law of the land.

As criminal intelligence is fast becoming the modern day policing, the Intelligence School once pioneered by IGP Solomon Arase in conjunction with other African countries is gradually re-positioning the Nigeria Police among the intelligence comity of Nations, Whilst the community policing and intelligent-led policing, safeguarding life and properties of Nigerians would become easier in the face of rising cultism, kidnapping, arm robbery, militancy, ritual killing and much more the Boko Haram insurgency.

Here I see a man who is not hypocritical as we have seen in recent time with men of easy vessel for selfish reasons best known to them, yet unmoved with what destiny holds for him but rather a show of patriotic zealousness and exhibition of professionalism, a core mandate of the Nigeria Police Force, thus what he needs at this point in time is stability to bear on his enforcement policy since implementation strategy has always been the bane in achieving the maximum result.

To this end, for effective policing more funding is required to enhance rapid capacity building in the state- of- the- art modern gadgets, and robust collaboration and synergy between the sister-agencies for a better Nigeria.