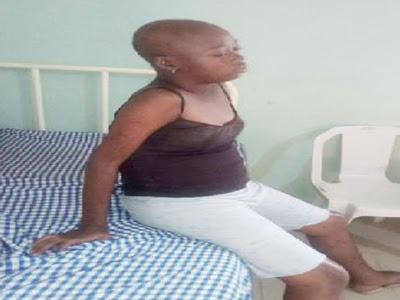 17-year-old Oreoluwa Bakare is a JSS 3 student whose future ambition to become a banker is about to be cut short by a terminal disease, Lymphoma, a doctor’s report has confirmed.

Oreoluwa’s predicament, according to her sister, Mrs Funmilola Bakare, whom she lives with, dates back to July last year when she suddenly began snoring heavily in her sleep. In addition, she also began complaining of slight pain in her throat.

She was taken to the Lagos State University Teaching Hospital, LASUTH, Ikeja, where examinations were carried out on her. A CT scan revealed a nasopharyngeal mass. A biopsy of the mass was done and histology showed Lymphoma.

Oreoluwa was referred to a hospital in Enugu for radiotherapy, which was terminated after about a week, owing to a breakdown of their machine.

Oreoluwa has now been referred to a medical facility in Bangalore, India for continued care and monitoring.

The referral letter issued by the Clinical Oncologist at Charis Medical Centre on December 28, 2017, reads in part: “The above named (Oreoluwa Bakare) presented at our centre with complaints of generalised edema of three months duration, which started in the throat and neck.

“A CT scan of the post-nasal space was done, which showed a huge nasopharyngeal soft tissue mass – Lymphoid hyperplasia. She later presented with axillary and inguinal lymphadenopatgy. A biopsy of the nasopharyngeal mass was done and histology showed poorly differentiated carcinoma, likely alveolar rhabdomyosarcoma immunohistochemistry showed LCA and CD20 positive, Non Hodgkin’s Lymphoma. She has had 26Gy of radiation to the nasopharynx and cervical lymph nodes.

“We would hereby like to refer her to you for continued management.”

Oreoluwa’s mum, who has single-handedly raised her and her two sisters since her husband deserted them over her inability to bear him male children, is unable to raise the money needed for Oreoluwa’s treatment in India.

She is therefore appealing to well-meaning Nigerians to come to her aid and help raise the N8million required to cover the medical bill and return trip of Oreoluwa and herself to India.

Since August last year, no less than N2million has been raised through the help of family, friends and church members and spent on tests and treatments thus far.

If you are still in doubt, please call her mother or Aunt below for verification.