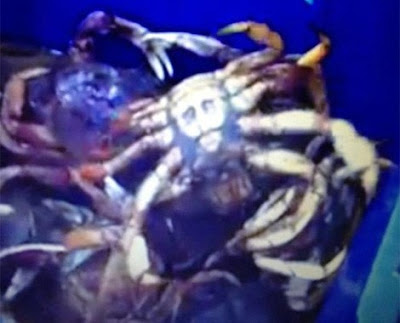 The news of Osama Bin Laden Crab has gone viral since the release of a footage on the belly of a Crab with striking resemblance to that of Osama.

This time around it’s coming from the belly of a CRAB.

After his death, Osama’s body was buried inside the sea to avoid his grave site from becoming a shrine.

The above freaky image was caught on camera by a family on a fishing trip in Washington.

A freakish image of the bearded monster was caught on camera by a family filming a fishing trip.

The exact same face on the belly of the crab was the one gunned down by US Navy seals last year.

We learnt the crab was thrown back into the ocean because it’s illegal to keep.

A man identified as John Cranfield who is the head of the family that saw the crab claimed he didn’t notice the image until he examined the footage carefully.

Guess America is in trouble because Osama is coming for a big revenge ha ha ha….