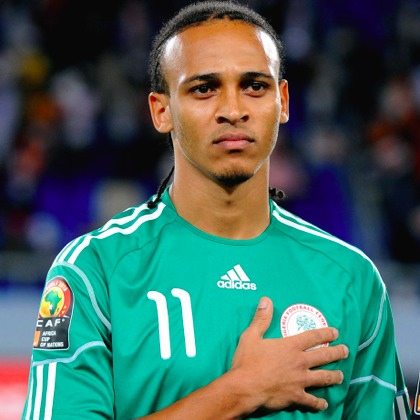 Osaze Odemwingie, a Nigerian-born England-based striker who occasionally plays for the Nigerian Super Eagles is set for a recall by Nigeria ahead of the Africa Cup of Nations, AFCON, after quitting the football club the brought him fame. naijagists.com

“Osaze will be recalled to the Super Eagles after his discussions with Keshi at the weekend,” said team spokesman Ben Alaiya.

An international since 2001, Osaze established himself at the 2004 Nations Cup in Tunisia, where Nigeria placed third.

However, the West Bromwich Albion striker has not played for the Eagles since a 2013 Nations Cup qualifier in Rwanda in February and Keshi revealed last week the player has told him he has quit international football.

Osaze said he was disappointed he only played a minor role during the 2010 World Cup after playing all the qualifiers.

“He told me he has decided not to play for Nigeria anymore. He said he was unhappy with how he was treated in the national team in the past,” Keshi said.

“He said he played in all the qualifiers for the 2010 World Cup only to be dropped in the finals in South Africa. He assured me he has no problems with me as a person and he took this decision even before I took over the team.”

In what appears to be a turnaround of his earlier statement, the West Brom star said that he remains available to play for the Eagles if selected by Keshi.

“If the coach decides to call me, I am still available to play for my country. When I decide that I want to stop playing, I will come out and say so myself,” Osaze told KickOffNigeria.com in another interview.

Osaze however clarified the situation. “I spoke with Keshi and I told him about my unhappiness with certain things in the national team, including the fact that as a player who has served his country with full commitment for over 10 years, I got into trouble for asking to be excused from a friendly game when I had an injury.

“And I pointed out to him that it appeared the same trend was continuing under him during the game in Rwanda because of the way I was treated.

“So since I didn’t want to be seen to be destabilizing the national team, I decided to stay away,” he said.(PM reports)