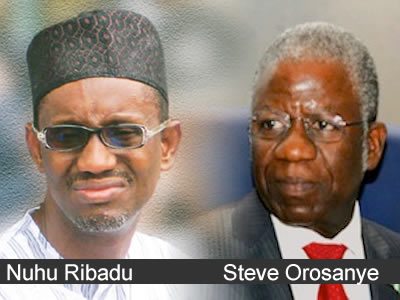 Ribadu and the deputy chairman of the task force and former Head of Service of the Federation, Mr. Steve Oronsaye, openly quarreled at the presentation in the presence of President Jonathan and the Petroleum Minister, Mrs Deziani Alison-Madueke. PAULINUS AIDIGHIE presents excerpts from Ribadu and Oronsaye’s interviews.

Ribadu’s report: “There was a slight drama during the presentation of your report. Mr. Oronsaye said the process of the whole exercise was what he quarreled with and not the substance. What is your take on that? Well, with due respect, what are the processes he is talking about? He was not there at the inauguration of the committee. He did not participate even for a day. He did not come out to sit down at the time when we came out with our rules and how we were going to conduct the business of the task force. He never participated even for a single day; not even a single hour.

The only time he came was when he was intervening on behalf of a company that was supposed to come and pay money to government. About $1.5 billion. That was the only time Steve came in. And when he got in, it was very embarrassing and we respected him. He said you brought in the Economic and Financial Crimes Commission (EFCC) officials to be interrogating people and that he thought that was not part of the process. You see, he was never there for him to even know the process. He was never involved in anything. He still used the task force to even get an appointment in government.

He is a board member of the NNPC. It is the highest authority of the NNPC. He said it is not conflicting with his job because he was not the chairman of your panel, that he was just a member. Secondly, that he didn’t intervene on behalf of any petroleum company and that he even asked the people more biting questions and that if he was intervening, what pressure did he then put on the committee? That is what he is saying. And that he was in the private sector and rose to become a partner in KPMG and that his image is dented and that he may consider legal option.

These are the things he is saying. Well, I wish him well and it is not like I do have any personal thing. And that you never liked him even right from when you were working with Obasanjo, that you have never been friends. He is not going to drag me into any altercation or controversy with him because I have passed that. I do respect myself and I would not allow myself to get into this type of thing. I would not have said a word if not because of what he did right in front of the President. The explanation was very clear. I thought that was very unfortunate and it was very misplaced.

There was no sense in what he did. Moreso, he had no reason whatsoever. He didn’t play a role in the work of the committee and he couldn’t come at the tail end… And only two of them out of the 17 people. So many people worked so hard to produce that report. I felt it was very unfair, very, very unfair to all of them and for him to have come to play that role he played, it was very, very disappointing. And you put a caveat emptor. Somebody pointed out that in your summary of the report, whether number four there, you said the figures have not been reconciled, and that is like a disclaimer. Yeah. No, no, no.

This is also the genuiness of the work we did. You see, we took records from different departments: from the NNPC, the Federal Inland Revenue Service (FIRS) and the Central Bank of Nigeria (CBN). What we just said was that we didn’t have the time to go to every detail of what they gave us to cross check what they gave us. We are not disclaiming anything. We just said that those figures that you got for example, from the CBN, we will not go back to the CBN and look at every single detail and it will take endless time to do so. That is all what we are talking about. No more, no less. And I thought that was like trying to be fair and honest and just in what we did. And he was talking about process and not content.

What even worries me and including of course, Nigerians and the media, I think pay attention to what the report says and not the controversy that they tried to create. They are deliberately building this thing to make it an issue and then we forget the real thing, that is, the content. This controversy shouldn’t be given prominence over what clearly is more important to Nigeria and to Nigerians. I feel the intent was maybe to just create a controversy and thereby diverting attention. That is what is even happening now when we should be examining how much was looted.

Absolutely! That is why I want us to go back please. And it matters for us to pay attention to what is in the content. The media, Reuters and others circulated a bit of it. Is there any way that you will sensitize the media on the content of that report? How much essentially was looted from the process? You see, I have the report and it is out there. I wouldn’t want to say things more than what is in the report itself. We gave highlight of some areas that we felt very important in the speech that we delivered at the point of handing over the report. The report is almost like in the public domain now. People will see what is there. It is there. Very sober report. Nothing abusive, nothing accusing.

Oronsaye said the language was subjective. I don’t think it is true. I don’t think it is true. It is just the plain truth. Simple, straight-forward and it is meant to help the government if they want to do what is right. Do you have confidence that your report will come to light or it will be buried or it will gather cobwebs in government’s coffers? I hope not because a lot of work has gone into it to produce it. And we believe them when they said come and give us this honest opinion, views and facts about this industry. You believe it will be implemented? I pray so. It is not about belief but I hope and I wish that they will implement what they have been given.

And that is where we get the money to run our affairs. The funding of government comes from that industry. So, to stop the corruption there, it is very possible you can double what we are today earning from the industry in a short period. (Source: DailySun)