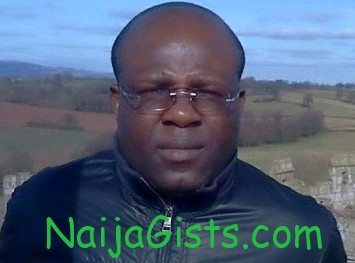 Osezua Osolase, a 42-year old man who was accused of using Witchcraft to silence two under-age girls whom he smuggled from Nigeria to Gravesend, UK with the aim of using them as prostitutes, has been jailed for 20 years. naijagists.com

Osezua Osolase tricked the two orphans into the UK with a promise of giving them a better life.

On taking them to the Uk however, he used them as slaves and plan to transport them to Mainland, Europe to be used for prostitution business.

It was reported that one girl had hair cut from her armpits by a man wearing feathers, while others were slashed with knives, forced to drink potions and had blood taken with syringes to cast a spell over them.

The girls were told they would die or never bear children if they tried to escape or revealed what had happened to them.

Osolase lived in a terraced house in Gravesend, Kent, but his home was a secret staging post for vulnerable teenage orphans as they were smuggled from Africa to several European countries.

Detectives discovered evidence that at least 28 victims were smuggled in and out of Britain by Osolase over a 14-month period, earning him up to £1.5 million.

But the true figure could run into hundreds, as the pedophile was overheard by one girl boasting he had been operating for 15 years as he tried to sell her for £60,000.