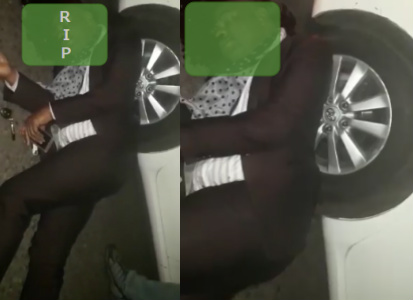 According to The National Helm, the killings of Nigerians in South Africa has continued following the brutal murder of another man who was attacked by unknown assailants. A video footage which was posted online shows the moment the man was left dead in the pool of his blood after the assassination.

The man was shot in the head at a point blank rage while returning from an outing. His car key, phone and wallet were left untouched by the assassins as he had already died beside his car before people gathered to rush him to the hospital.

In the video, his Nigerian friends can be heard crying and lamenting in Igbo language about the increasing rate of killing of citizens in South Africa as they asked what is happening in the country.

According to reports, over 117 Nigerians have been extra-judicially killed in South Africa between 2016 and 2018 for one flimsy reason or the other.