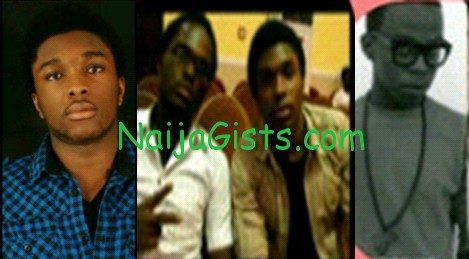 Oct 7, 2012 – Outrage Over The Brutal Murder Of 4 UNIPORT Students By Aluu Villagers

After the video of the brutal killings of 4 students of the University of Port Harcourt (UNIPORT) 2 days ago, several bloggers and reputable Nigerians at home and abroad have been outraged. naijagists.com

Twelve people who allegedly participated in the killing of the four students of the University of Port Harcourt (UNIPORT) have been arrested by the Rivers State police Command. The students namely Ugonna, Ilyod, Tekana and Chidiaka were allegedly killed in Aluu community near University of Port Harcourt after been accused of stealing a Laptop and a phone, though no evidence has been provided to prove the authenticity of the allegation leveled against them before they were lynched by the mob.

Reacting to different agitation from different quarters, the Rivers state’s police command had promised to bring the perpetrators of the crime to book, cautioning the students of the University not to react to the incident in the most negative way through protest or any of such related move.

With the promise made earlier, The Rivers State commissioner for Information, Ibim Semenitari had tweeted 3 hours ago( 4:30) today (@ibimtoby) that “PH government is outraged. The Governor has ordered investigations and already some arrests have been made.”

Also, a reliable source had told our correspondent that the community Chief has also been arrested in connection with the distasteful act.

The Rivers state Police Public Relations officer (PPRO), Ben Ugwuegbulam, a deputy superintendent of Police (DSP) who confirmed the incident via a mobile interview confirmed that four young men were killed over the theft of a laptop and a phone, but said it was still difficult to know whether they were actually students of UniPort or not.

Meanwhile, our correspondent had spoken with some concerned Nigerians who have totally condemned the killing of the four students, stating that such act was the highest injustice that can be done to anybody.

Speaking with an ex student of the University of Port Harcourt, Miss Ene, she said ” I have lived in that place before. I have not known those people with this kind of act. I lived there for four years, and nothing of this nature ever happened. Ene who is currently a youth corps member lamented the death of those young men while advocating that the perpetrators be brought to book.

Speaking with a United Kingdom based journalist, and one of the most popular bloggers in Afica, and CE0 of EPR4, Egor Efiok, she lamented thus ” wicked Souls” ? Did u see the way the fire shocked the body of the one that appeared dead and it was like he used all his last energy to try and escape, which made him appear as if he wanted to fly? ?My heart CUT! ?I was crying and my nanny was holding me. ?I kept on shouting for the fine boy who died last. He pretended to be dead, yet they smashed his head.? He kept moving about and they kept hitting his head with a stick every time he moved. At a point he hugged the body of one of the guys and was holding his head. I’m sorry, but death sentence is what the perpetrators of the act deserve. ” Egor said while sobbing.

Also speaking with our correspondent, Linda Ikeji, an award winning Nigerian blogger, she express an obvious angst over what she termed the age of barbarism. ” I have never seen a thing like this in my life. I’m demoralised at the moment and lack appropriate words to qualify what I saw today in the footage. I have not been able to blog today because I can’t just put my pieces together. I didn’t take it that serious until I watched the video. That was the extreme. When they sent the pictures to me from UniPort, I had a lot of doubt, but now I believe that Barbarians live amongst us. I’m sad, and I hope the law won’t spare the murderers”

Mr. James Bamisaye has also condemned in totality what he referred to as a murder case. According to Bamisaye “ We need to be enlightened in this country. People should value other’s lives. The police should swing into action and get those people arrested. They should all be charged for murder case, including those standing and motivating the real criminals; those ones can be seen as accomplices. I can’t watch that video. I won’t sleep if I do. I will break down.”

Charlyboy AKA, Areafada who said the act was disgusting called on the governor of Rivers State, Chubuike Amechi to use all available security apparatus to get the murderers arrested. The areafada in his twitter handle @areafad1 said “If they can’t get hold of those guys let them tell us. We will employ the gutter tactics. This act must be condemned in it entirety as it could have been you or me. We want to see a positive outcome. Those guys deserve death sentence.

Another fast rising blogger, Daniel Igwe chidi, had told our correspondent in tears on the need for all journalists to unite against those responsible for the killing of the Four students. Daniel lamented thus ” o boy, I have been crying. Where are our activists, and the rest of our journalists? We must get united against these Barbarians. I just watched the video, man! This is sad” (Source: Daily Post)

This is totally unacceptable and barbaric.