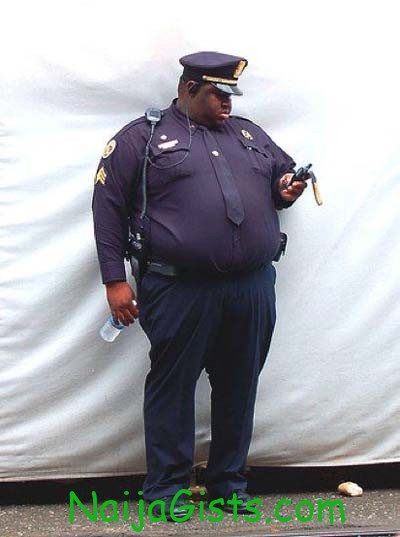 A Pakistan police commander has ordered tens of thousands of pot-bellied officers to diet or quit frontline duties, officials said Monday in what one newspaper dubbed the “battle of the bulge”.

“I’m on a diet and if I can do it, why can’t you?” she quoted Rehman as telling officials last month in the province.

At least 50 percent of Punjab police are overweight, Ghazanfar said.

Local daily The News said the number overweight officers in the city of Rawalpindi, the headquarters of the army that has been hit by numerous Taliban attacks, stood at more than 77 percent, adding that “policemen appear to be losing the battle of the bulge”.

Police said officers had been given until June 30 to shape up and those deemed too fat from July 1 would not be given jobs in the field.

“Police officials are joining gyms, jogging and doing other exercise, including a lot of running to become thin and slim,” Ghazanfar said.

Overweight officers are ineffective and “cannot chase bandits, robbers and other criminals properly”, she added, blaming the problem on under-staffing.

“We have a shortage of personnel, what can you expect when one official is doing the job of six people? They don’t get time for physical fitness,” she told AFP.

Another official who did not wish to be named said 100 stations were initially singled out for the exercise order, but Rehman later decided to send warning letters to the entire Punjab police force.

He said the chief believed people only had pot bellies “if they commit a sin or if they are sick”.

“It is my guess that the department will assess progress and if necessary the deadline may be extended,” a senior official said, requesting anonymity.

The Pakistani diet is rich in meat, oil and ghee.

The country is ranked 165 of 194 on the Forbes list of fattest countries, with 22.2 percent of the population considered overweight despite immense poverty faced by millions in the country.

Local reports have put the figure at 25 percent

Our Mind: The Most Important Asset
Religious War Looms In Nigeria – Cleric Warns