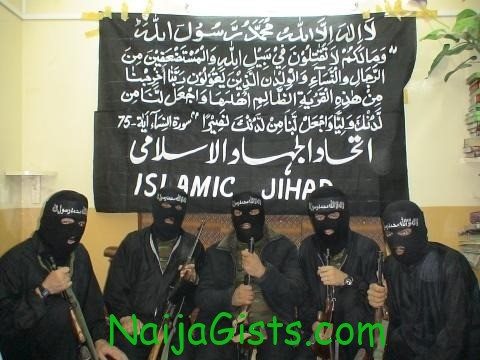 As bombs continue to go off in northern Nigerian churches and a horde of Christians are massacred by Boko Haram, a Muslim fundamentalist sect, clerics have warned that a religious war may be eminent if urgent steps are not taken. naijagists.com

At least five churches were bombed yesterday in Kaduna State, north central Nigeria, with at least 40 worshippers killed and more than a hundred injured. Unofficial figures this morning show that the death toll has risen to over 100.

Christians were reported to have retaliated shortly after the bloody attacks and the clashes left many other people dead and created more tension in the already volatile region.

The Prelate, Methodist Church Nigeria, Dr. Ola Makinde; the General Overseer, Soul Winning Chapel, Rev. Moses Illoh and other clerics who spoke with reporters early today called on the Federal Government to take urgent steps now and prevent more bloodshed before it is too late.

“I think this bombing of churches can lead to religious war. The Nigerian government is a ruse,” said  Rev. Moses Illoh.

He urged Christians to unite as northern Muslims are taking undue advantage over their disunity.

According to Illoh, the current climate of violence could lead to a religious war if the government does not curb it.

According to Dr. Ola Makinde, “Bad elements say the killing of Christians is not a religious crisis but why are they throwing bombs into churches on Sunday during worship hours?”

“Boko Haram cannot be greater than the Federal Government and the Federal Government should have the political will to fight this crisis. Christians can defend themselves when attacked but they should not retaliate. We should put up a spiritual fight and God will fight for us. Nobody can fight God and win,” Makinde said.

The cleric stated that he feared a religious war might erupt if prompt actions are not taken by the authorities.

“We cannot afford a religious war in Nigeria, let them think twice. This crisis is also an attempt to pull down Jonathan. No country can survive a religious war. Northern political leaders should focus on developing the north rather than all these,” he said.

Makinde warned as bombs continue to explode in the north, investors would shun the volatile region which would lead to the collapse of their already battered economy.

The collapse of the economy would lead to job losses, more suffering and poverty and more instability, Makinde reasoned.

According to Primate Elijah Ayodele, Founder, INRI Evangelical Church, the frequent bombings of churches and killings of Christians could spark off a religious war if steps are not urgently taken by the Jonathan administration.

“Jonathan has not taken steps to end this crisis. He should organise three days praying and fasting in September. God is giving us a sign of what is to happen but this government does not listen. The government knows what to do.

“Let the president take a bold step and organise three days praying and fasting or else, there will be more attacks that will spill to the South,” Ayodele warned.

In the midst of these crises, Northern Christians appeared to have resolved to look beyond the President Goodluck Jonathan administration for their safety as they resolved to defend themselves.

Reacting to the latest attacks on three churches in Kaduna State, the chairman of Northern Christian Forum of Nigeria, Evangelist Matthew Owojaiye and the Publicity Secretary of Northern Christian Association of Nigeria, CAN, Elder Sunday Oibe said it had become obvious that the Federal Government could do very little about the security challenge currently tearing the nation apart.

“It is extremely obvious to all that these people have infiltrated every apparatus of governance and any plan government makes to address the security challenge will necessarily be licked to Islamic militants even before it is conceptualised,” Owojaiye said.

According to him, the leadership of Northern Christians was looking beyond government to find a local solution to their collective problem before these jihadists annihilated everybody who professed the Christian faith in that part of the country.

“We have decided to approach our counterparts in the South to assist us financially, spiritually and otherwise to enable us take our collective destiny in our hands. We plan to import surveillance equipment and train our youths on how to use them to monitor the movement of these Muslim fundamentalists,” Owojaiye added.

“It has now become obvious to everybody that there are plans to exterminate the Christians from the northern part of the country,” he said.

The cleric also regretted that the situation had degenerated to the level where Christian youths who were disenchanted with the mindless killings of their parents, siblings and other relations while worshipping their Creator, were left with no other option than to take up arms in reprisal  measures.

Speaking, Oibe wondered why the security agencies in the country were yet to find an amicable solution to this nagging security problem up till now, stressing that Christian youths were getting more and more agitated.

The cleric called on the Federal Government to wake up from its slumber and arrest the incessant bombing and killings of Christians in the north.