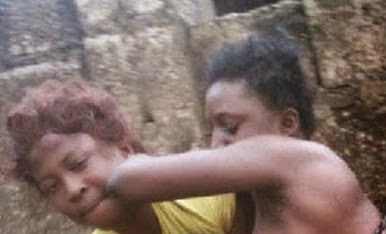 A 23- year old hair dresser at the popular Oba market, Miss Faith Idehen, is currently battling excruciating pain in her left ear after she was allegedly bitten by her landlord’s daughter simply identified as Vivian, a single mother of two.

The accused was said to have demanded the payment of monthly electricity bill of N1, 500 from the tenant who pleaded with the landlord’s daughter to exercise patience.

She, however, deposited N1, 000 with a promise to pay the balance of N500 later in the day, a plea that fell on Vivian’s deaf ear.

The victim reportedly left the compound and boarded a commercial bus to her place of work at the Oba market, but unknown to her, she was being trailed by Vivian who caught up with her at the popular (Yanga fish market) and a fight ensued between the two ladies.

Faith, who bled profusely from her left ear, was rescued from the grip of her attacker by those present at the scene of the fight.

The landlord’s daughter was later arrested by policemen 24 hours after the incident.

The victim said, “I didn’t know that I was being trailed even after I pleaded that I will pay the balance of N500 when I returned from work. The moment I alighted from the bus I heard someone calling Faith, Faith and immediately I turned behold it was Vivian who grabbed my hair and started beating me and before I knew what happened I saw my ear dangling with blood gushing out.

“I was later rescued and rushed to the Central hospital where it was stitched.”

Continue Reading
You may also like...
Related Topics:daughter, Landlord, tenant