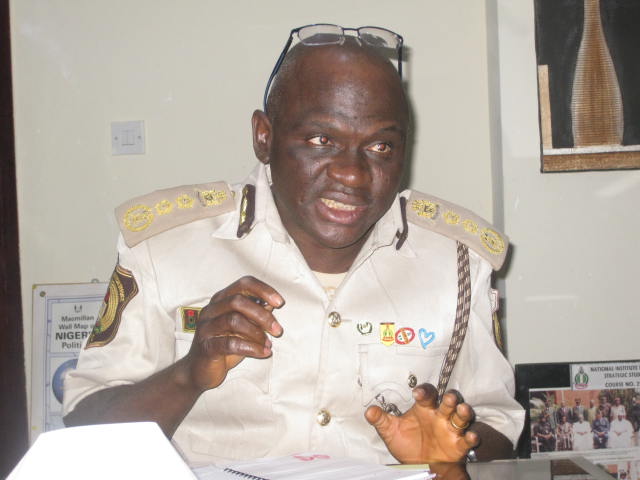 President Muhammadu Buhari on Friday ordered the suspension of the Comptroller-General of Immigration, David Parradang with immediate effect.

We learnt that Parradang’s suspension might not be unconnected with the ongoing investigations into how a Lebanese terrorist, Ahmed Al Assir was given a Nigerian visa by the Nigerian embassy in Beruit, Lebanon.

Parradang was directed to hand over to the most senior officer, DCG, Martin Kure Abeshi, who had been ordered to take over the affairs of the service, according to a statement by the Director of Press, Ministry of Interior, Alhaji Yusuf Isiaka.

President Muhammadu Buhari was reported on Wednesday to have ordered investigations into how the terrorist got the Nigerian visa.

Our correspondent had exclusively reported on Friday that the officials of the NIS and foreign ministry might be sanctioned seriously, if found to have been negligent in the course of duty.

Assir, who had been on the wanted list of Lebanese security forces, was arrested at the airport last week while attempting to visit Cairo, Egypt, en route to Nigeria on a forged Palestinian passport.

He was accused of involvement in the death of 17 Lebanese soldiers and was sentenced to death by the court in 2013. The embassy in Lebanon had denied culpability, saying the fugitive did not apply to the Mission for visa, stressing that the Nigerian visa on his fake Palestinian passport was forged.

The embassy, had in a diplomatic brief, explained that Assir, who was of Palestinian extraction, had undergone surgery to alter his appearance so as to evade detection by security operatives.

It stated that the wanted terrorist had been using aliases to evade arrest, adding that the pseudonym was not on the watch list of the Lebanese security forces.

Our correspondent gathered that security agencies planned to conduct a DNA testing on Assir to confirm his identity.

Checks indicate that with the suspension of the immigration boss, other officials involved in the visa processing at the Nigerian embassy in Lebanon would be heavily sanctioned, including the Nigerian ambassador to Lebanon, Amos Oluwole.

Before the hammer fell on him, Parradang had reportedly said that there were no immigration officials at the embassy in Lebanon.

“We don’t have immigration officers in that country. We understand that the president has ordered investigation into it, so we are waiting for the outcome of the investigation,” he was quoted to have said.

The immigration service under Parradang had in 2014 come under scathing criticisms over a recruitment exercise in which about 20 applicants died and scores injured.

Parradang had denied culpability for the incident and blamed the then Minister of Interior, Abba Moro whom he said conducted the exercise without carrying the NIS along.

The administration of former president Goodluck Jonathan subsequently set up a presidential panel to probe the incident with a mandate to also employ the relations of deceased applicants into the immigration service.

Moro was however not sanctioned for the incident and a probe by the Senate did not see the light of the day as the report was not tabled for debate.