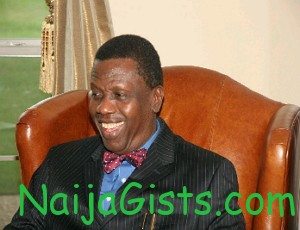 The General Overseer of The Redeemed Christian Church of God (RCCG), Pastor Enoch Adeboye, has revealed the circumstances surrounding his birth around 1942, saying that they were mysterious.

According to him, he was born on a Sunday when there was rain and sunshine, while his delivery was singlehandedly handled by his mother in a room at Ifewara, Osun State, a reason he was nicknamed “the tiger.”
He gave the revelation to worshippers at the Redemption Camp, Kilometre 46, Lagos-Ibadan Expressway, Ogun State, while giving a sermon on the topic: “Wonders of His Names.”

While speaking on the significance of names, the cleric said in the course of his growing up, he had to drop some names that he discovered were inimical to his spiritual and physical progress.

Adeboye reeled out his full names as “Enoch, Elisha, Sunday, Adejare, Adetona, Olagundoye, Adeboye, including his alias, which the people chorused as “the tiger.”

According to him, “I asked my mother when and how I was born. She said it was a time when a certain king mounted the throne in Ilesha. And I said that was 1942. She said it was a Sunday when something was being celebrated in the church. She said she was alone in the house when she delivered me.

“She said it was a very strange Sunday because the rain was falling and the sun was shining, which is an indication in Yoruba that a tiger was being born. You may think I’m joking; ask my elder sisters, they are still alive; they will tell you one of my nicknames is the tiger. But do I look like a tiger to you now?”

Adeboye emphasised the need for children of God to revisit their names and change some, as well as add some as the case may be.

“What is your own name? Check if there is any evil one there and reject it. And if there is a good one you want, add it and my God will say Amen,” he noted