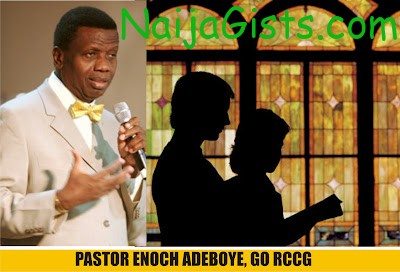 Pastor Enoch Adejare Adeboye, the General Overseer of RCCG (Redeemed Christian Church Of God) in a recent live programme on Dove TV revealed some powerful marriage secrets to single ladies and guys and those planning to get married soon. naijagists.com

In the programme, Daddy GO who takes pride in the marriage success of his followers said its better to stay single than to marry the wrong person.

In this exciting sermon, the man of God revealed why RCCG church weds with the bible and not the ring.

He also warned ladies to stay off marrying jobless men.

He additionally warns men to stop looking at outward beauty when choosing a wife.

The most controversial part of the sermon is a point where he mentioned and we quote “Don’t Marry Outside RCCG“.

We guess he has his reasons for saying so.

Read full text of the sermon below:

There is a difference between enthusiasm and unruliness. As unstoppable youths we need to be enthusiastic but not unruly. Out of all the instruments mentioned in the bible for praising the whistle wasn’t mentioned! The whistle isn’t allowed in church, leave it for the football field!

Marrying the wrong person is like living in hell on earth and divorce isn’t an option!

Don’t ever think you can marry somebody and change the fellow, if the person doesn’t change before you get married it is a settled case!

If you marry just because a guy is rich, tall and handsome but he not a true child of God, you are heading for trouble! Goliath was Tall, king Saul was lanky but he lost his crown. Don’t marry a fool.

If you marry someone who doesn’t believe in holiness, you are the one who dug your own grave yourself cos you’ll only be wife NO 1, many others are likely follow!

WHY REDEEM CHURCH, RCCG WEDS WITH BIBLE INSTEAD OF RING

Romans 8:31: The reason RCCG weds with the bible instead of a ring is because the bible can never change, the word of God stands forever but a ring can be removed at anytime!

Those who will reach the top must be peculiar! There is always room at the top but only few will get there.

DO NOT MARRY A JOBLESS MAN

Don’t marry a man who has no job! Before God gave Adam a wife, he gave him a job! If he says he is a contractor, ask him for evidence of his previous contracts because you might just be the contract he is on about!

Don’t ever marry outside the church and you have no reason to marry outside RCCG. The reason is that If you are both from the same church even when trouble comes it is easier for the pastors to handle it!

Don’t marry a girl simply because she can sing! In the choir there are some people that can sing but they are falling angels! Marry a prayer warrior! If a girl cannot pray for 1 hour, don’t marry her.

Don’t marry a girl who is worldly! If you do, you have carried what you’ll worship for the rest of your life!

Music is not music unless it is organised. It must have rhyme, rhythm and repetition.

While the right kind of music keeps the devil away, the wrong music can invite demons.

The number one reason why God chose David to be king was because he was a musician singing the right songs!

It is possible to have wonderful music, music that will refresh you and bring God down without making noise. When the bible talks about making a joyful noise to the Lord, it was talking about shouts of Halleluyah.

In your gatherings, check the lyrics, rhyme and rhythms of your songs you use in worshipping God. As much as youths might not want to sing hymns all day, make sure the songs you sing are really glorifying God not just noise.

As youths, take evangelism seriously! Use your youthful strength for God and be proud to proclaim the gospel of Jesus Christ. Ecclesiastes 12:1

It takes only a few people to cause a riot the universities, why can’t a few unstoppable youths get up and start a riot to the kingdom of darkness?

Joshua 1:1-9, Deuteronomy 34:9: We are to build on the foundation that has been laid for us by our fathers.

The elders are the foundation, the youths are the flowers! It’s a dangerous thing to be a flower, people pluck flowers but hardly do people touch the roots!If you stay connected to your roots, you’ll not dry up.

The one who is UNSTOPPABLE is the one who wouldn’t allow sin to come in because our God is a Holy God!

If you will worship God with good music not just noise , if you’ll witness without compromising, if you will be different and ready to stand out for Christ, if you are willing to pray with ceasing then you’ll be UNSTOPPABLE.