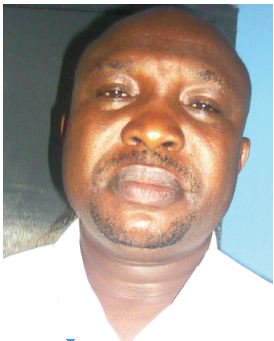 The founder of the Sufficient Grace Church, Pastor Okechukwu Joseph, has been arrested by operatives of the State Intelligence Bureau (SIB), Lagos State Police Command, for defrauding members of his church huge sums of money. According to a police source, the Pastor allegedly approached some members of his church with the pretence that he needed money to repair his car among other projects with a promise to pay back as soon as possible as he was expecting money from undisclosed sources.

The source further disclosed that once he collects any money from a victim he starts giving flimsy excuses until the victim gets adding that most of his victims are women who do daily contribution (ajo) business. However, his obtaining money by false pretence came to the fore after defrauding two women who do daily contribution business, huge sums of money. It was gathered that he had been making empty promises of paying back for about eight years. The source said: ‘’When one of the women he allegedly defrauded took the matter up by reporting him to the church elders and threatened to report him to police he quickly paid the woman the money he collected from her. Unfortunately he was not be able to pay the second woman identified as Miss Bridget Nwankwo, who took the matter to the police due to pressure from the people who did the daily contribution and were anxious to collect back their money totalling N308,000.

‘’When the Pastor was invited to SIB’s office in January 2017, and was asked to find a way of reconciling with the woman, Pastor Joseph did not honour the appointment. He instead jumped bail several times only to appear on Wednesday July 12, 2017 to continue with his flimsy excuses for fear of being tracked down by SIB operatives. We will charge him to court for obtaining money by false pretence and stealing. He is a serial fraudster,’’ the source added. Explaining his involvement in the offence the suspect Joseph said: “I am married with two children. I am from Okwe Oboro, Ikweanu local government area, Umuahia, Abia State. I am the General Overseer of my church, Sufficient Grace Church, based in Lagos. ‘’I know the complainant Miss Bridget Nwankwo as a member of my church. I had no misunderstanding with her. What really happened is that I collected N308,000 from her to do some reconstruction work in my church where we were before I relocated, due to circumstances beyond my control.

‘’Now we are somewhere in Oworonshoki area because the owner of the landt died and the place was sold off. I paid her N60,000 and another N40,000 totalling N100,000. I was not able to pay the remaining N208,000, because money was not coming to me as before. She later reported me to SIB that I did not pay her the balance of N208,000. When I was invited by the Police to have a talk with her on how to pay the remaining money, I told her that I would be paying her N20,000 every first Sunday of the month but she refused. The church I am pastoring is a growing church. If you look at my body physique you will think that I have money. I had problems and that was why I had no money to pay her. I had a very serious financial problem. He added: ‘’The boy living in my house, Chidi Eze was sick and died two months ago. He was operated in April 2017.

I was in Benin and I came and he was taken home, to the East, Abia State but he died of complication. I was travelling to see the boy’s parents at their home town because they were not happy and they had been asking me about how their child died. Their tradition demands that you must bring something and I had been running around to see what I could do before police invited me. I know that it is eight years today. I was not running away. I have intention to pay the balance. The Police said they will charge me to court. I do not want them to charge me to court. I will be paying instalmentally. However, the complainant Miss Bridget Nwankwo said: ‘’My clients have been asking me for their money. It is eight years now and I cannot trust him again. He has caused me much pain and if I keep quiet my client will not believe me.’’