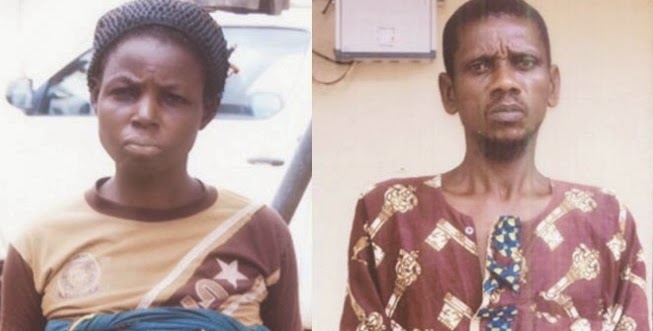 Oct 26, 2014 – Pastor Beheads Church Member After Taking His Wife In Ebonyi “I Don’t RegretsJoining My Pastor To Kill My Husband”

A man has met his untimely death after donating 1 hectare of land to a fake pastor in Ebonyi State.

45-year-old Nwe­bonyi Nwuguru who hailed from Edukwu Inyima town was said to have given the land to the General Overseer of Divine Salvation Ministry, Pastor Amos Odorimo, 45, for the purpose of building a church auditorium.

As Sunday Sun learnt, the man’s wife, Roseline, 41, began to attend the church. Nwuguru didn’t initially raise eyebrows over the long hours his wife spent at the church. Somewhere along the line, the pastor opened the door wide for the devil and of course went beyond his pas­toral brief. He began to minister to the woman’s body rather than her soul.

At the headquarters of the State Criminal Investigation Department of the Ebonyi State Police Command where he and Roseline are being held as inves­tigation into the alleged murder continues, Odorimo spoke with Sunday Sun.

“I am married and have five children. The deceased Nwebo­nyi Nwugwu was nice to me. He gave me a hectare of land to build my church. His wife, Roseline Nwuguru attended my church. It was from there that I started having love affair with her. When the love was getting deep we found out that the de­ceased was disturbing us and we have to plan for him,” Odorimo said. When Nwuguru got wind of the strong and deep romantic relationship between his wife and Odorimo, the fake pastor, he naturally screamed blue murder. With their love affair known to Nwuguru, Odorimo and Roseline were deeply rattled, but refused entreaties to end the re­lationship. Rather, they allegedly connived to solve the problem permanently, and invited the devil to be their chief adviser.

Act 2, Scene 2: On September 30, 2014, unsuspecting Nwu­guru decided to visit his farm. Promptly, Odorimo offered to give him a ride on his motor­cycle. Along the way Odorimo stopped and dismounted from the motorcycle.

Asked what happened thereafter, Odorimo gave this blood chilling response: “I took the deceased’s cutlass and cut his head. His wife also hit him on the head with a big stick. We ran away to Benue State, but men of the local vigilance group arrested us and handed us over to the police.”

Roseline Nwuguru, who hails from Ado Local Government Area of Benue State while corroborating the account of Odorimo said: “I have seven children for my late husband. He stopped people from entering the church because he had misunderstanding with Pastor Odorimo. Actually I was having a love affair with Pastor Odorimo. I don’t regret my action and joining in killing my husband. He was a wicked man, because he prevented people from entering the church.”

After speaking with Sun­day Sun, the two suspects, Pastor Odorimo and Roseline Nwugwuru ate lunch together from the same plate as a way of showing their love for each other.

Notwithstanding their show of deep affection for each other, Ebonyi State Commissioner, Maigari Dikko has assured that the suspects would have their day in court once the police conclude investigations.

What a wicked world! How can a woman join a murderer to kill her husband.

This woman is definitely under a big spell… RIP Nwebonyi Nwugwu