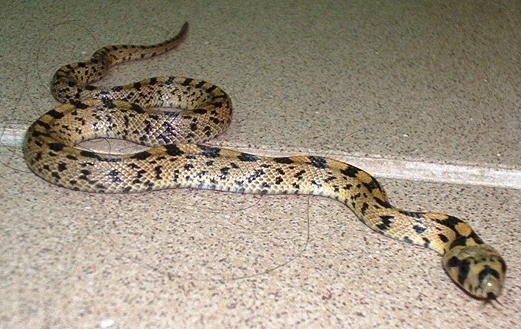 A big drama played out at Greater Grace Deliverance Ministry, Kakuri in Kaduna State today after a strange snake chased a general overseer and church members away from the church.

The incident happened during the deliverance section after the church’s midweek service.

An eyewitness hinted DAILY POST that the general overseer, Naphthali Biem was conducting deliverance for a woman when the strange snake suddenly appeared on the altar.

On sighting the uninvited creature, one of the ushers raised alarm, which forced the pastor to stop the prayer and ran for safety.

“Other members of the church also ran after the pastor when he took off,” the source added.

He said it took some ushers several minutes to kill the snake which crawled and hid behind one of the speakers in the church.

When DAILY POST reporter arrived the church premises Wednesday evening, the service had ended with some members hanging around the church, apparently discussing the strange invasion.

Speaking with our correspondent, Pastor Biem described the incident as strange and devilish.

He said the snake might have been sent by enemies of the ministry to attack his members.

“It was strange and devilish. I have never witnessed such thing in my over 30 years in the ministry. If you check around, you will discover that there is no bush around here.

“How the snake got in here is still a mystery. Our enemies are at work but we won. Thank God it didn’t hurt anyone,” he told our reporter.