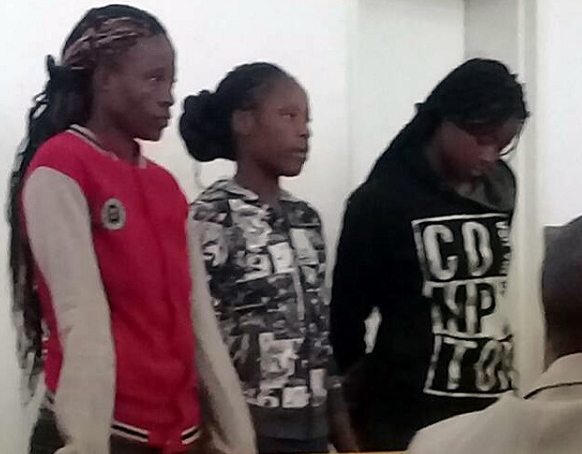 3 women, identified as 21-year-old Sandra Ncube, Riamuhetsi Mlauzi, 23, and 25-year-old Mongiwe Mpofu have been arrested after they allegedly gang-raped and detained a pastor who had come to demand money he was being owed by one of them.

The man is a pastor at a local church in Cowdray Park, Bulawayo, Zimbabwe.

Ncube, Mlauzi and Mpofu, who reside at the same house in Cowdray Park suburb, were arraigned before Western Commonage magistrate Mr Lungile Ncube on charges of aggravated indecent assault on Tuesday.

The Magistrate ordered that the accused be remanded in custody till August 7 for continuation of trial.

The prosecutor said that “On July 14, 2017, at around 7PM, the complainant went to the three accused persons’ residence to collect his money from Riamuhetsi Mlauzi, which she owed him.”

He explained further that the court that the complainant was ushered into the house before Ncube held him by the waist and fondled his private parts.

Shoko said, “They forced him to lie on the bed and undressed him. Ncube sat on his chest and he tried to push her away. However, Mlauzi, who was in the same room, held his legs together and sat on top, pressing him against the bed.”

He added that “Ncube had sexual intercourse with the complainant once, without his consent.”

During trial, the trio denied “raping” the complainant but admitted indecently assaulting him.

One of the accused, Ncube said, “We were just playing around Your Worship. I did not think that he would take it seriously.

Also, Mpofu distanced herself from the incident and said she had only been called to bring condoms.

She said, “I was not part of it. They just called me to bring condoms. We keep condoms around the house and there were some in my room, so I just brought them.

Mlauzi said she wanted to “fix” the pastor, whom she accused of having a tendency of walking in on her when she was bathing.

Mlauzi said, “He always walks in on me bathing and claims to be unmoved as a man of God. I just wanted to see if he was going to be aroused or not. I did not plan to execute the whole rape thing, Your Worship.”

However, Magistrate Ncube referred the complainant to Mpilo Central Hospital for a medical examination.
He was also told to provide medical report in court as evidence as the matter was adjourned till August 7.

Continue Reading
You may also like...
Related Topics:Friends, pastor, zimbabwe