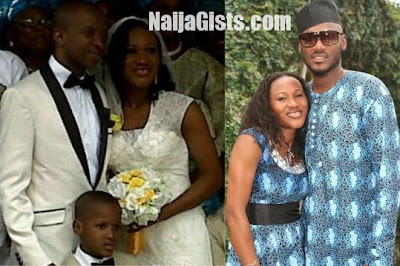 The founder and the GO of Royal Christian Centre in Ikeja Lagos, Pastor David Adeoye who married one of the former girlfriends of African queen crooner Tuface Idibia has revealed to family and close friends on why he married her.

Last week Monday, the 22nd of July, 2013, Pastor Adeoye officially tied the knot with Adesunmbo Ajaba in Lagos with family and few church members in attendance.

As earlier reported, Sumbo Ajaba is a committed member of the Royal Christian Centre. She is a leader in the music ministry.

Pastor Adeoye said he married the beautiful mother of two because she completes him.

He vowed to stay with her till the end of age.

Check out an excerpt from his wedding vow below;

“I love this woman. With this woman there’s no dull moment. She makes me complete. When you lose something and you regain it from somewhere else, you should know how it feels. She’s the love of my life I will forever be there for you”

Mrs Folake Adeoye, the former wife of the Man of God died in November 2011 after a brief illness.

Congrats to Sumbo for this great opportunity.

May God bless their marriage with peace, love and children.