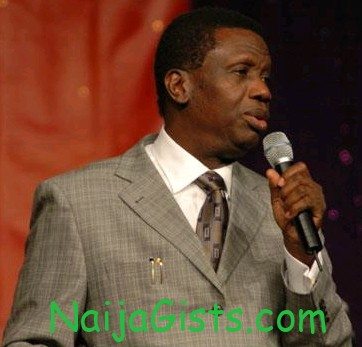 Adeboye said this while delivering his sermon at the 15th Holy Ghost Congress at the Redemption Camp on KM 46, Lagos/Ibadan Expressway.

The week long congress, which began on Monday, had the theme: “Signs and Wonders.”

According to him, God has plans for Nigeria, pointing out that “sin distorted God’s plan for the nation.

“God is not just a builder, but an architect, He has good plans for Nigeria, but somewhere along the line something tampered with the plans.

“Sin came in, the plan was distorted, God being God in his wisdom has decided to restore and rebuild the nation,” he said.

Adeboye said the original plan of God for Nigeria was that the people would multiply, be fruitful, have dominion, prosper and be in control.

We went to town to seek the opinions of Nigerians on Adeboye’s assurance that God will rebuild our country instead of us working hard to correct the anomalies observed in the system.

In his own reaction to Adeboye’s statement, Editor of Gani Law Publication, Mr. Oluwole Kehinde said only Pastor Adeboye himself could clarify what he said.

“But in essence, what the man is saying is that there is nothing difficult for God to do, especially in Nigeria of today when all things are put in place, good leaders, good governance, sincerity of purpose; then all other things will fall in place.”

Lagos lawyer, Barrister Supo Osewa said: “President Goodluck Jonathan and other people in positions of authority should take a hint from what the man of God has said which shows that there is crisis in the polity. All is not well with the country. So, all our leaders should try as much as possible to imbibe the fear of God in whatever they do. It is only in this realm that Nigeria can move forward. God cannot help a lazy man. The man must have been praying for the country, believing that in not too distant time, his prayers will be answered.”

The former Secretary-General, Nigeria Bar Association, NBA, Lagos branch, Barrister Ike Uko said: “As a man of God, the man wished the country well. But for God to rebuild Nigeria what are the conditions attached. We need honesty, hardwork, perseverance and good neighbourliness. These are virtues of great nations. Is Nigeria ready to embrace these virtues? Of course, there is no situation God cannot turn around but the condition precedent must first of all be fulfilled.”

In her own comment, spokesman of Save Nigeria group, Mr. Yinka Odumakin said God has already given the country what it needed to make it great, saying that God will not come down to build the nation for us.

He said Adeboye prayed for these rulers to come to power and now that they are there, they spoilt the nation. “God has given us what we need to make Nigeria great but bad leaders which Adeboye fraternized with are killing us.”

Comrade Debo Adeniran, Chairman of Coalition Against Corrupt Leaders, CACOL, said when God created the world, he gave human beings powers to make themselves comfortable but in the case of Nigeria, a few individuals have decided that nothing good can happen in the country.

He said as a result, nobody should expect God to come down and fight for things to be better in the country after providing all that are needed for everybody to be fine.

“Adeboye has said his own, but what he should have done is to be on the side of the people by ensuring that corrupt leaders in the society are not given a pride of place in his church,” he said.

He stated that Pastor Adeboye is seen to be conniving with corrupt elements in the society as well as those who have successfully placed a barrier in the fight against corruption.

He said civil society will begin to reckon with him only when he stops corrupt people from attending his church and coming for blessing.

A member, Lagos State House of Assembly, Gbolahan Yishawu simply reacted “Amen” to the prayer of Pastor Adeboye but added that though he believed in miracles, God will not personally come down to fight the cause of Nigerians.

He added that Pastor Adeboye’s prayers should instead become an eye opener for Nigerians.