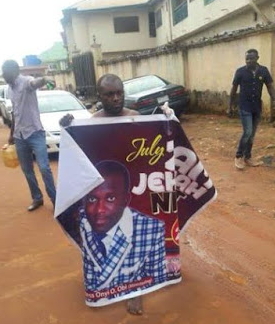 A paedophile has been arrested in Asaba, Delta State for allegedly raping his church member’s daughter.

The suspect who is the Founder of a church (name withheld by request) located along Ibusa Road in Koka area of Asaba reportedly lured his victim into the church office with the intention of praying for her. It was in the course of the prayers that he raped her.

It was gathered that the 7-year-old victim cried to her parents shortly after the attack.

She was taken to the Federal Medical Centre in Asaba where doctors saw bruises in her private parts.

Upon investigation, the suspect was arrested.

The suspect confessed to the crime and blamed sex starvation for his unholy act.