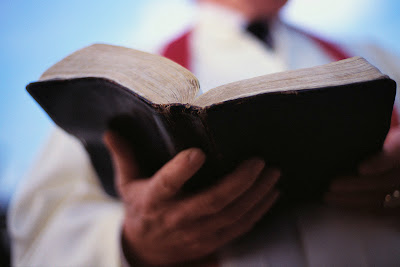 Judgment Day seems to have come for a pastor, Emmanuel Onu as he has been arrested by the Imo State Police Command for allegedly conniving with others to sell his girlfriend’s baby for N100,000.

Pastor Onu had told the mother of the baby that her baby died at Ajiwe Street, Aba in Abia State.

The Imo state Commissioner of Police, Mr. Mohammed Katsina told Sunday Sun that the pastor who hails from Umunwada Onitcha in Ezinihitte Mbaise Local Government Area of Imo State and who resided at Avutu Obowo impregnated his church member who was also his girlfriend, one Nkeiru Chukwuemeka.

Nkeiru was said to be in labour pains when Pastor Onu called another lady friend (Precious Adiele) who then introduced to them a hospital called Angel of Mercy Hospital at 19 Ajiwe Street Aba, Abia State.

CP Katsina explained that on July 9, 2013, Nkeiru was delivered of a baby boy. Later Pastor Onu arranged to sell the baby for N100,000. Onu and his cohorts then told the mother of the child that the baby was dead.

CP Kastina explained that the friend, Adiele agreed with the pastor on how the baby would be sold. So, when Adiele brought in the buyer, she instructed Onu to hide so that he would not be seen. The pastor complied.

All seemed well with the transactions until Nkeiru started asking to see her baby. The nurse attending to her explained to her how her baby had died after birth.

Meanwhile, Nkeiru’s elder brother insisted on knowing where the baby was buried. That was when the matter went to the Otoko Police Station. That led to the arrest of some nurses of the hospital and later Dr Azuka Odike.

Odike explained that Pastor Onu came to her hospital with his wife who was nine months pregnant and that on July 9, 2013, “the wife was delivered of her baby in my hospital around 9.00am”. Pastor Onu, his girlfriend and baby left the hospital around afternoon time after they had settled their bill of N17,000.

“Pastor Onu told me that the girlfriend has mental disorder and that she had strangulated her sister and her mother. Pastor Onu warned me that I have to be careful with the baby because of his wife’s condition,” she said.

Odike explained that it was three weeks later that Pastor Onu came with policemen “to my hospital and alleged that the baby was dead and that I have buried it. They arrested my nurses and later, I went to the Otoko Police Station to report myself. I just can’t believe this.

“I am the one who discharged Pastor Onu‘s wife with the baby and they went away together. They alleged that I told them that the baby was dead and I have buried it.

“I could not have buried their baby. I am not in a position to bury their baby. Why are they coming three weeks after to arrest me with policemen?” the doctor queried.

On his part, the pastor said “ I am a pastor of Christ Chosen Church of God at Obowo LGA, Imo State and I was called by God in 2012. I am not married, but I impregnated my church member, Nkeiru Chukwuemeka.

“Immediately, Nkieru delivered, I heard the voice of the baby. I was so happy and I left the hospital to buy some things for her. When I came back an hour later, I could not find the baby.

Pastor Onu explained further: “Dr. Odike told me that the baby was dead. I took my girlfriend back to my house and left the hospital. After some days, Nkeiru’s elder brother came to ask about our newborn baby.

“At first they didn’t see me, later when they saw me, they brought policemen that arrested me and took me to Obowo Police Station and I spent one week and two days in police custody. The elder brother of my girlfriend asked me about the baby and I told him that the baby was dead.

“I took them to the hospital at Aba where my girlfriend delivered the baby. They reported the case at Otoko Police Station and the police arrested the nurses and staff in that hospital. The following day, Dr Odike resurfaced and she was arrested. It was when police investigated the matter that they discovered that the child was still alive and not dead,” he added.

Adiele hails from Itu Obingwa, Abia State and said “Pastor Onu is my friend. He told me that his girlfriend was in labour. I directed them to the Angel of Mercy Hospital and the following day, Pastor Onu told me that the wife had been delivered of a baby . I told him that I would soon come and see him later because I was conducting examinations.

“Pastor Onu told me that he didn’t want the wife to know that the baby was alive because of her mental disorder. He said he was afraid as to whether his girlfriend could take care of the baby because of her condition.”

Adiele added: “Pastor Onu asked me about who could take care of the baby. Later I introduced one Ndidi to him. Pastor Onu took the baby to Ndidi and Ndidi went away with the baby.

“I gave Pastor Onu N10,000 for recharge card and other things to cool down himself,” she said.

CP Katsina said that the suspects would soon be charged to court. He explained that the command was still trailing the said Ndidi who bought the child for the sum of N100,000.

Continue Reading
You may also like...
Related Topics:girlfriend, pastor, pregnant