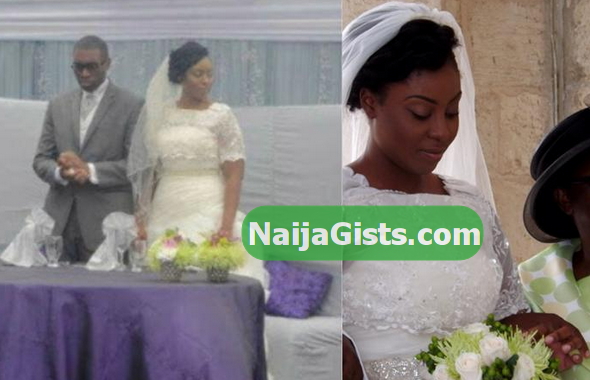 The second son of Pastor W F Kumuyi, John Kumuyi and his wife, Love Odih have been suspended from Deeper Life Bible Church over their controversial wedding that took place in Jamaica last month.

Love Odih was dressed in a more modernized wedding gown that is unacceptable by the standard set for Deeper Life members by the church leaders.

The bride was adorned in a flowing wedding gown with matching veil and wedding flower. She also applied lipstick and other makeup

The couple also hired a Limousine to convey them to their wedding destination coupled with a gigantic wedding cake that contradicts Deeper Life church’s tradition.

Due to the multiple controversies their wedding generated on social media like Facebook and Twitter especially by concerned Deeper Lifers, the church has placed the couple on temporary suspension to allow them to seek the face of God for forgiveness over their ‘stubbornness’.

The announcement was made at Deeper Life’s monthly miracle and revival programme held at the Deeper Life Conference Centre, DLCC, Lagos-Ibadan Expressway, John and Love’s suspension from church work was announced to the over 50,000 Deeper Life faithful at the event by Pastor Philip Oluwi, a key leader in the church.

The order came from GO of Deeper Life, Pastor Kumuyi.
He ordered the leadership of the church to suspend John Kumuyi and his wife for the embarrassment their wedding caused the ministry.

Read the short announcement of John Kumuyi & Wife’ suspension below

As part of the protocol, the couple have been forced to tender an apology letter for deviating from Deeper Life’s norm and doctrine.

Read their apology letter below;

“We also use this medium to profusely and sincerely apologise to the General Superintendent (Kumuyi) of the church for the embarrassment and heartache our action has caused him; more so as he had earlier declined to be at the event. We acknowledge that we may have benn distracted by cultural differences as we both have lived outside Nigeria for nearly two decades.”

“This notwithstanding, we fully accept that having been nurtured, taught and brought up with the sound teaching of the word of God, we should have been able to draw the line which we failed to do. We have now realised the far reaching effect of our actions and omissions and do plead with the church for forgiveness and also appeal that any action that should be taken be directed at John and Love, as we take this time to prayerfully reflect on our actions.

“We take full responsibility for what has happened and this action should in no way be blamed on the General Superintendent or the leaders of the church in Nigeria, United States, Jamaica, or United Kingdom and beyond.”

For the past few weeks, some folks have been covering up for John Kumuyi and his wife.

John Kumuyi and his wife said they have both lived outside Nigeria for quite some time and they’re both suffering from cultural differences related issues.

Will their apology stop this from happening again in the future? Time will tell.

But wait a minute, what is indecent in this wedding?

The major bone of contention is that the bride wore a beautiful wedding gown and light make-up isn’t it?