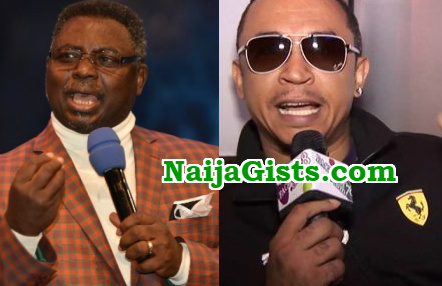 The founder of Kingsway Int’l Church in London Pastor Ashimolowo has officially lent  his voice to the ongoing tithing debate controversial OAP Daddy Freeze started on the social media few weeks ago.

The highly respected man of God who addressed the issue during a night service at this church in Lagos slammed Daddy Freeze even before he started preaching.

Ashimolowo who called Daddy Freeze a ‘yoyo’ urged him to ‘shut up’ because he doesn’t have the moral power to tell people what to do.

This is part of what Ashimolowo told Freeze in the video now making round on the social media.

I felt like sharing with you a subject once and for all let’s settle this matter.
I will like to speak tonight on the power of the tithe.
I will like to speak on the power of the tithe
Some bunch of yoyo somewhere should not determine what we believe.
Some guy who beats his wife, throws her out, throw his children out of the house should not determine what we believe.
Not only that, he broke his own son’s knees while he was trying to defend his wife.
Not only that, he drinks alcohol,sleeps with women and he is trying to preach to preacher.

Watch the full sermon below

The issue with Daddy Freeze is that he is intentionally making Nigerians curse men of God, this can only be done by a man who have zero respect for the things of God.

A glance on his Instagram profile show how most clueless Nigerians acting on impulse have been cursing highly respected men of God.

It is very important for everyone to express their opinion on this subject matter but to blaspheme against God in the process is risky… Watch it Nigerians!!!