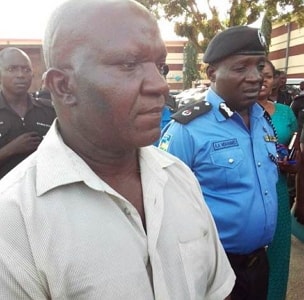 A “Man Of God” recently arrested for child defilement has claimed innocence.

Pastor Udoh Okoh, the founder of Christ Abiding Church was on Tuesday picked up by the gender section of Lagos State Police Command for allegedly defiling a 9 year old girl.

The 54-year-old Pastor was exposed after the girl confessed to her mother when semen was seen dripping from her private part.

She reportedly told to her mother, Peace Effiong that Pastor Okon was the rapist who started the indecent act last year and turned it into a regular affair.

Medical examination also showed that the 9-year-old rape victim’s  hymen had been ruptured long ago, an indication that the suspect has been having frequent carnal knowledge of her.

The Pastor however denied the allegation. He claimed that he only appealed to the victim’s mother not to punish her in public when semen was seen dripping from her body.

“I am surprised they said I defiled her. The child could be my granddaughter. There was a day she came to my shop and I asked her to assist me in carrying empty crates. I sell non-alcoholic beverages. She helped me carry the crates to my other shop and kept them outside. That was all.” – Okon said

Continue Reading
You may also like...
Related Topics:girl, lagos, pastor