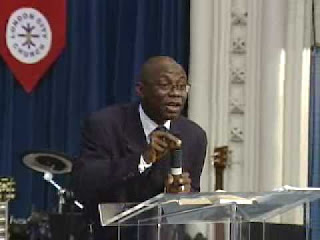 Pastor Tunde Bakare has been summoned by SSS officials over a controversial preaching against President Goodluck Jonathan.

According to leadership news, the invitation is sequel to a sermon which he (Pastor Bakare) delivered in his church wherein he accused President Jonathan of deliberately trying to bankrupt the country.

The publicity secretary of the Save Nigeria Group, Mr. Yinka Odumakin, who confirmed the development in a chat with LEADERSHIP on telephone, however, said Bakare, the leader of the group, was aware of the summon.

Pastor Bakare, the running mate to the presidential candidate of the Congress for Progressive Change (CPC), Maj.-Gen. Muhammadu Buhari, in the last general election was billed to honour the invitation but had left the country on Wednesday.

“We saw an invitation by the police asking Pastor Bakare to honour an invitation regarding a sermon that he delivered sometime ago, but, as I am talking to you now, he is out of the country,” Odumakin said.

Though, it was speculated that security agents might prevent him from making the journey, which many believe was to the United States of America, he made without it hindrance.

“We have vampires whose assignment is to kill Nigeria and to make sure that Nigeria does not exist thereafter. Suddenly Nigeria that was that cheered now has clueless, shoeless people take over the administration of Nigeria.

“And the one word I have for Nigerians is, don’t despair. Jonathan is dancing to the drumbeat of destiny. His destiny is to bankrupt Nigeria. All men of goodwill must rise up to stop him. And stop him we will do. And I said stop him we will do. Don’t make mistake about what you are hearing from me today, it is clear in my heart beyond any iota of doubt that Jonathan’s destiny is to bankrupt Nigeria, balkanize Nigeria.

And there are forces behind him totally committed and determined to do so. Oil vultures with petrol dollars and all kinds of political “tinkers” not thinkers are tinkering with the destiny of our nation with their palace prophets telling them peace when there is no peace.

Turn your Bible with me to the Book of Chronicles. Tell it on the mountain top that this man is dancing the drumbeat of destiny.

And before they could recover from that anguish you serve them air crash for lunch. And before they could gain their moment of sanity, you serve them with petro dollar bribe and now you vaunt about it telling us nothing can happen because you are in charge, the land will vomit you as the Lord lives in the name of Jesus Christ and every collaborator will not go unpunished.

Your year of punishment has come. Tell it on the mountain top that there are still men of goodwill who will stop you dead in your tracks.

I am not talking about deluded ambitious politicians who now think of 2015 when the nation is in a mess in 2012. We can do all the tinkering, if we don’t rise up now there will not be 2015.”

Whaooo this preaching is very tough. This guy should be a politician.

My people make una give him a chance o.