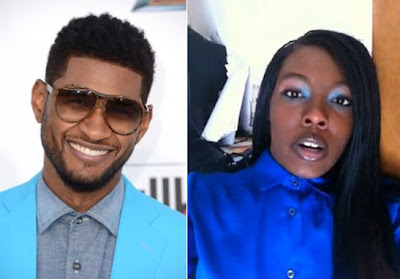 A crazy in love, delusional woman named Darshelle Jones-Rakestraw who has been seriously stalking music star User Raymond has come out with a new video claiming she is his wife.

According to the music star, Darshelle Jones Rakestraw showed up in his Georgia family home uninvited with the intention of harassing him and his family members.

We learnt the 26-year old woman went to Usher’s house, knocked his door and demands to be let in. Police officers were immediately called to the scene and she was warned to stay away and never come back to the property to which she adhered to for only few hours.

To their surprise, the delusional woman returned the very next day and was arrested by the cops who were once again called to the scene.

She tried to convince the cops that she was Usher’s wife and she had misplaced her keys.

In another twist to the event, Darshelle posted a Youtube video to clear the air on the allegation against her saying: “I am not a stalker; he (Usher) has officially slandered me and defamed character.” Darshelle said Usher has been secreting giving her money and promised to help her career and with her living expenses.

Darshelle Jones Rakestraw stated that the singer has been paying her through Western Union and the Bank of American since February 2011.

This woman is either delusional or crazily in love!